Drought in Western US heats up as a Senate campaign issue

RENO, Nev. (AP) — In a midterm campaign season dominated by inflation, abortion and crime, there’s another issue that is becoming more urgent in Western states: drought.

The topic of water historically has played little to no role in campaign ads in much of the region, but funding to fight drought is coming up now in door-knocking campaigns and is on the long list of talking points that advocacy groups are using to rally voters in two states with vulnerable Democratic incumbents and looming water cuts: Nevada and Arizona.

“This issue appeals to the economic anxiety of our voters and our people,” said Angel Lazcano, a Las Vegas-based organizer for Somos Votantes, which seeks to mobilize Latino voters across swing states.

Federal officials recently announced that Nevada and Arizona would get far less water in 2023 as the stranglehold on the Colorado River worsens because of drought, climate change and demand. The federal government threatened to impose deeper, broader cuts if the seven states that depend on the waterway can’t agree on how to use less.

The two vulnerable incumbents whose states are hit hardest by the cuts — Catherine Cortez Masto, of Nevada, and Mark Kelly, of Arizona — seized on the opportunity to seek funding through the federal legislation. They were joined by U.S. Sen. Michael Bennet, who is seeking reelection in Colorado, and Arizona’s Sen. Kyrsten Sinema. The four Western senators negotiated $4 billion in last-minute funding to help address the region’s growing water crisis in the Inflation Reduction Act.

In tight races in Nevada and Arizona, the Colorado River basin cuts and last-minute $4 billion in drought-relief funding will serve as a test of how influential access to water will be in deciding two of the most consequential Senate races this cycle.

Though still not allocated, the drought relief funding will generally pay farmers to leave fields unplanted and will pay for water conservation and habitat restoration projects.

Cortez Masto said in a brief interview that she doesn’t see it as a campaign issue, but rather an issue for the entire West.

Somos Votantes released ads in English and Spanish, thanking Cortez Masto for the funding. In Arizona, the Environmental Defense Fund and its advocacy partner did the same for Sinema and Kelly, who has touted the funding on social media.

Kathleen Ferris, a senior water policy researcher at Arizona State University, said drought is a politically murky subject. She doubts the relief funding will have any sway on the election, and even the Colorado River cuts have not risen to the level of other hot-button issues.

Campaigns historically have trouble communicating complex water policies because there are so many interest groups that have a stake, she said.

“It’s not necessarily easy to say, ‘Well, I will do this,’ which would hurt this group, or ‘I will do that,’ which would hurt another group,” said Ferris, a senior research fellow at ASU’s Morrison Institute for Public Policy. “So mostly, what they say is ’I will convene stakeholders’ and ‘We will have robust discussions’ and ‘We will figure out a path.’ Well, that’s not very sexy for the electorate.”

The funding is small in the wider context of a historic megadrought. Farmers in Yuma, Arizona, are already requesting over a quarter of the funding, and projects elsewhere to convert ocean water to drinking water often cost billions.

Though projects in Nevada and Arizona may get priority, 17 states are eligible for the funding, which will be doled out through 2026.

Questions also remain about whether the one-time allocation will turn into an annual stipend. If so, experts say, other funding requests could come under scrutiny from states not reliant on the river.

Though the basin cuts will not result in immediate new restrictions, they signal that unpopular decisions about how to reduce consumption could come soon.

Nowhere have the effects of drought been as visible as in Lake Mead, the Colorado River’s largest reservoir, which supplies water to nearby Las Vegas. Residents have watched human remains and old artifacts reveal themselves as levels drop.

He pitches drought relief as an environmental and economic issue — affecting jobs and opportunities next to rising gas prices, labor shortages and inflation.

“I feel like people have that surface-level understanding of these things that are happening,” he said. “Like they hear about the cuts and the money coming in, but they’re not too sure with how to take that in, and that’s where we come in. To tell them about how it is, or what these investments mean.”

The funding has earned mixed reactions from Republican candidates in Nevada.

While the inflation measure was universally vilified by the party, GOP lawmakers and candidates did not deny that drought needs urgent attention.

Adam Laxalt, who is running against Cortez Masto, has mostly stayed away from talking about drought. In an email, he said he supports efforts to address water problems in Nevada, noting that the crunch “didn’t just happen overnight.”

The Inflation Reduction Act will contribute to more inflation, and Cortez Masto should have secured funding without having to support a larger bill, he said.

Sam Peters, a Republican candidate for Nevada’s 4th Congressional District — which covers much of rural central Nevada down to the northern edge of the Las Vegas area — criticized paying farmers not to use water, saying that Democrats “throw money at it without a real solution.” He suggested desalination as a longer-term solution.

U.S. Rep Mark Amodei, Nevada’s lone Republican congressman, supported the general idea of the funding and also pointed to desalination, the technology that removes salt from ocean water and turns it into drinking water.

A $1.4 billion desalination project was proposed in California with support from Democratic Gov. Gavin Newsom but was rejected by a California coastal panel in May because of its cost and threat to marine organisms at the base of the food chain.

Days after the Inflation Reduction Act passed, Amodei sent out a blog post that didn’t mention drought but outlined the provisions he said would deepen the country’s economic woes.

Asked about the drought funding later, he said it was “maybe some of the least egregious stuff” in the act. 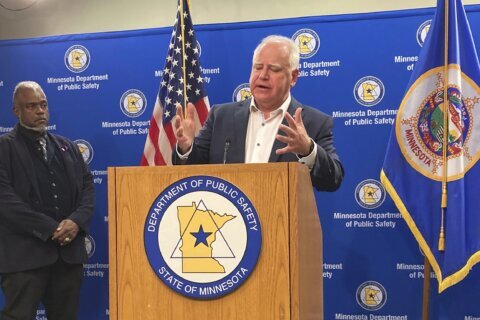