TALLAHASSEE, Fla. (AP) — Florida Gov. Ron DeSantis visited a South Florida Jewish temple to denounce anti-Semitism and stand with Israel, as the Republican governor cloaked himself in religion Monday while signing a bill into law that would require public schools in his state to set aside at least one minute of silence for children to meditate or pray.

His visit to the Shul of Bal Harbour, a Jewish community center in Surfside, Florida, had the air of a campaign event.

DeSantis seemed to blush when the Rabbi Sholom Lipskar introduced him as a “great governor and future world leader.” It has been speculated that the governor, who is running for reelection next year, might run for president in 2024.

DeSantis visited the temple to sign two bills into law. One would expand the role of volunteer ambulance services, while the other makes Florida one of at least 15 states, a legislative analysis said, that would compel schools to hold moments of silence at public schools. The state had already been among roughly 18 other states that gave schools the option to do so.

“It’s something that’s important to be able to provide each student the ability, every day, to be able to reflect and to be able to pray as they see fit,” DeSantis said. “The idea that you can just push God out of every institution, and be successful — I’m sorry, our founding fathers did not believe that.”

The ambulance bill allows some volunteer first responders, including those run by faith-based groups, to use emergency lights and sirens when responding to emergencies. Some Orthodox Jews rely on these volunteer ambulance services to help overcome religious sensitivities that prevent some people form using traditional emergency services.

The ambulance bill was championed in the state Senate by Democrat Jason Pizzo, the only elected Democrat to take the stage with the governor during the bill signings.

Pizzo also supported the legislation that requires moments of silence in schools, saying the students won’t be required to pray during those moments set aside by schools.

“It’s like a moment of meditation, relaxation, connection,” he said.

DeSantis used the event to tout his support for Israel, which he visited in his first year of office. During his speech, he referred to the United Nations as corrupt, saying the world body does more to sanction Israel than castigate China, which he lumped with what he referred to as “rogue regimes.”

As DeSantis began speaking, authorities forcibly removed a heckler from the hall. It was unclear what message the man was making as police pulled him away, most of his words inaudible to those watching a broadcast of the rally. 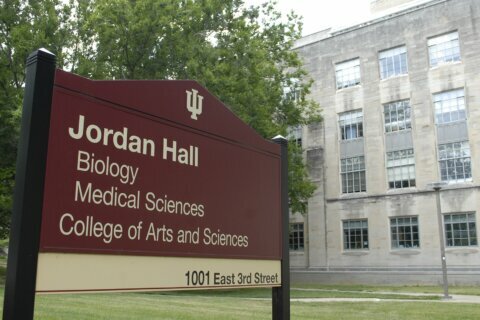