Thomas Jefferson High School for Science and Technology in Fairfax County, Virginia, has once again been named one of the top 10 top-performing high schools in the country, according to new rankings from U.S. News and World Report. Meanwhile, Maryland ranks No. 3 in the nation for preparing students for college, according to the rankings.
Listen now to WTOP News WTOP.com | Alexa | Google Home | WTOP App | 103.5 FM

WASHINGTON — Thomas Jefferson High School for Science and Technology in Fairfax County, Virginia, has once again been named one of the 10 top-performing high schools in the country, according to new rankings from U.S. News and World Report.

The science-and-math-focused magnet school was ranked No. 10 on this year’s list — a slight drop from its sixth place showing last year. Thomas Jefferson was named the No. 3 high school in the science, technology, engineering and math fields.

The No. 1 high school nationwide was the BASIS Scottsdale public charter school in Scottsdale, Arizona. Overall, six of the top 10 schools nationally hail in Arizona.

The U.S. News rankings evaluate more than 20,500 public high schools across the country based on students’ performance on standardized reading and math tests, graduation rates and other factors. A total of about 6,000 schools are numerically ranked.

In Maryland, the highest-ranked school nationally was Winston Churchill High School in Potomac, which came in at No. 113. (Winston Churchill was also Maryland’s top-ranked high school last year.)

Overall, though, Maryland is No. 3 when it comes to the highest number of gold medal schools. Nearly a quarter of schools in the state received a “gold” or a “silver” medal. Massachusetts is No. 1 this year.

Virginia ranked No. 18 in its share of “gold medal” schools.

Twelve states do not have any gold medal schools.

The top-performing school in D.C. was the School Without Walls High School in Northwest.

Individual schools’ showings in the rankings, which have been released annually, frequently shift year-to-year. In D.C., Wilson High School, which was ranked No. 2 last year, fell out of the rankings entirely this year. It’s a similar story in Montgomery County, where Richard Montgomery High in Rockville tumbled out of this year’s rankings.

The reason why some schools fell out of rankings this year compared to last year has to do with U.S. News’ methodology, its chief data strategist Robert Morse said. In the cases of some D.C. schools, they did not rank because they did not pass the first step of the four-step methodology. In other cases, some schools performed better than others on a tiebreaker, causing some schools to drop in rankings.

Just one school in Prince George’s County made the rankings — Eleanor Roosevelt High in Greenbelt — which ranked No. 21 in the state and was awarded a silver medal.

“They can get a sense of how schools are performing. We provide all this data, all these rankings, all this information to families … to give them a starting point, to help them compare options and see how schools in their area are performing, to enable them to make a better informed decision,” Ross said.

U.S. News partnered with RTI International, a nonprofit social science research firm based in North Carolina, to compile the rankings.

Why high schools moved up or down in the 2018 rankings 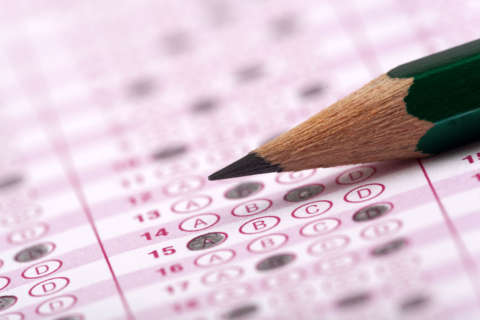