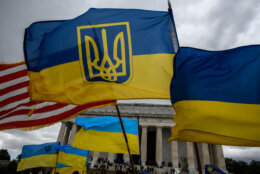 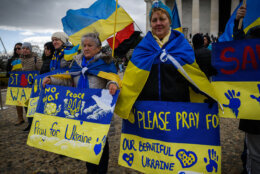 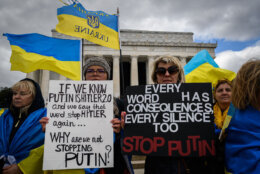 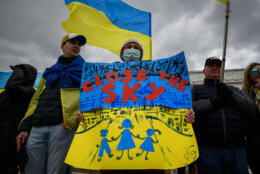 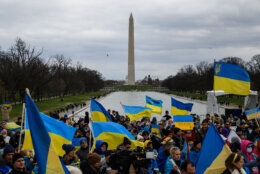 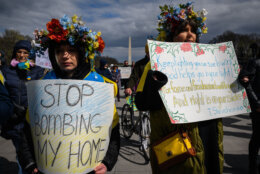 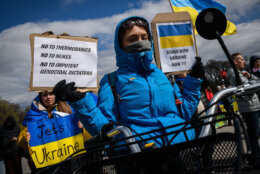 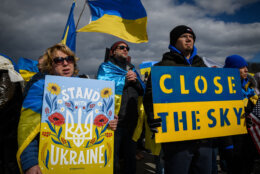 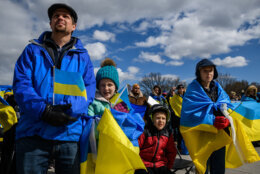 One month after the start of a devastating war, the message Ukrainians delivered outside the Lincoln Memorial on Sunday was simple: “Close the skies over Ukraine.”

With the bloodshed mounting by the hour and Russian weapons reducing once-bustling cities to rubble, Ukrainian Americans in the D.C. region gathered at the Lincoln Memorial to demand the U.S. and its allies make a stand against Russian President Vladimir Putin with a no-fly zone, shipments of more efficient weapons and increased aid for refugees.

“President Volodymyr Zelenskyy stated recently that truth is our weapon, our brave armed forces are dedicated and will defend every inch of our territory. But we need all the support we can get, with weapons, with financial and humanitarian assistance,” Oksana Markarova, Ambassador of Ukraine to the United States, said to hundreds of Ukrainians and their supporters.

When Ukrainians last rallied at the Lincoln Memorial in late February, they saw the war as a worst-case scenario whose horror could be avoided through a Western commitment for hard-hitting sanctions and weapons aid. That nightmare became reality days later, as cruise missiles rained down on airfields and Russian tanks breached border checkpoints. Millions have fled violence and tens of thousands have been killed in the four weeks since.

The war might be raging thousands of miles away, but for D.C. region resident Volodymyr Liashenko, Sunday’s rally was a chance to advocate for his friends and family back home. Liashenko, who hails from the eastern Ukrainian city of Kharkiv, says his own parents narrowly escaped the destruction of their apartment amid intense Russian shelling.

“They moved to another city after a week. It was the beginning of March, and the next day, a bomb was in their apartment,” Liashenko said. “I’m checking on them as much as I can. I call my friends every day and ask them: How is everything? Do you have electricity and water?”

With the war nearing a bloody stalemate, the D.C. region’s Ukrainian diaspora noticeably shifted its messaging Sunday to match Zelenskyy’s pleas for a NATO-led no-fly zone — an idea which the Biden administration continues to oppose, fearing a confrontation between U.S. and Russian forces that would spiral into a global conflict.

Barring a no-fly zone, the event’s organizers — which included nonprofits and advocacy groups such as United Help Ukraine, Razom for Ukraine and the U.S.-Ukraine Foundation — beckoned for the U.S. government to supply more efficient air defense systems, anti-ship weapons and warplanes so that Ukrainians could safeguard their own skies.

“I wish them to do more, but I don’t know if that’s possible or how it would affect the rest of the world,” Liashenko added. “But in my opinion, the Third World War has already started.”

#Now: D.C.’s Lincoln Memorial, a little over a month into Russia’s large-scale invasion of Ukraine. When Ukrainians last rallied here, four days before the war began, they sought strict sanctions and weapons to deter Putin. Their demands this afternoon: “Close the skies.” pic.twitter.com/8ImSMoWSL3

Reznik sponsored a resolution in the Maryland General Assembly expressing solidarity with the people of Ukraine. Earlier this month, Maryland also became the first state to declare a gas tax holiday after a federal moratorium on Russian oil imports; state leaders called the import ban a necessary step to counter Putin’s aggression.

A rally organizer later joked that he’d soon move to Maryland in gratitude for their support.

“There’s a lot more that we can do. We are a small state. But if every state did what Maryland has done, we would be much further along,” Reznik said. “I call on every one of my colleagues in every state legislature, and every governor in every governor’s mansion in this country, to do what we have done: divest from Russian investments, review your contracts and cancel them if any linkages are found.”

Reznik drew a common thread between Maryland’s role in the American Revolution — for which, according to popular tradition, General George Washington bestowed it the name “Old Line State” — and the Russian invasion of Ukraine.

Hundreds of people stood on the Lincoln Memorial’s steps for three hours. Reels of war footage showed Ukrainian cities crumbling under Russian airstrikes; the sound of air raid sirens from Kyiv briefly echoed down the Reflecting Pool. A haunting and graphic video titled the “Close the Sky Lullaby” cut from images of bombed-out playgrounds to children sheltered in metro stations.

Behind the podium, dozens held portraits of children killed in Russian bombing runs, QR codes for donations to refugees, bundles of sunflowers, and signs comparing Putin to Adolf Hitler and the devil.

Not all those who attended Sunday’s rally were Ukrainian, or of Ukrainian descent. Some, evident from the Georgian and Polish flags seen dotting the plaza, had either experienced Russian aggression before or feared they could be next.

Others, like Reston, Virginia, resident Ashley Barendse, saw it as an opportunity for solidarity.

“I’m not Ukrainian, but I’ve been to Ukraine before. I went to Kyiv and I went to Chernobyl. And so when Putin invaded, it just kind of hit really close to home. So I wanted to come out today and show some support,” Barendse said. “It’s been gut-wrenching. It’s been horrible to watch. I stay on Twitter basically all day, just to be a witness and to help elevate and get the word out in my own way.”

Barendse said she contributes to the Ukrainian Defense Fund, which provides supplies and support to Ukraine’s all-volunteer Territorial Defense Forces. She also keeps in touch with Ukrainians she met while abroad — including in Kherson, where residents protesting Russian occupiers have been met with tear gas, rubber bullets and gunfire.

“One said that he was taking his daughter out before it became violent the other day. My other contact has been buying supplies, he told me yesterday he’d bought a bunch of candles and toilet paper for a village in the nearby region which has been without power since March 2nd.”

“I understand the hesitation of closing the sky, but if we’re not going to do it then, by God, give them the tools to do it themselves. They’ve already said they’re willing, so we need to step up to do everything we can and support them.”