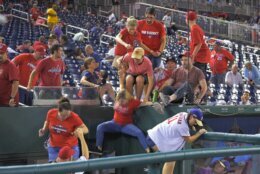 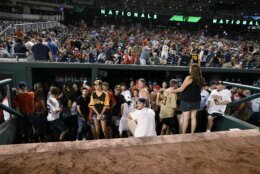 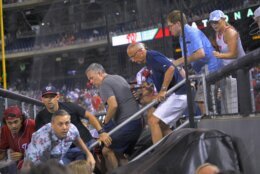 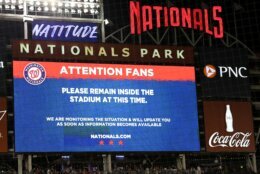 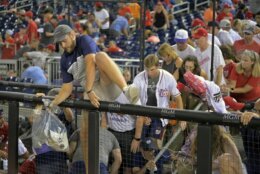 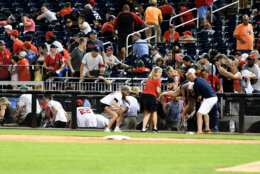 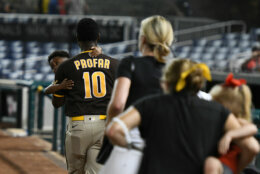 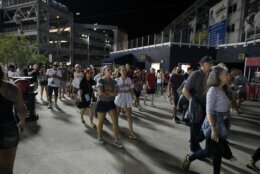 A shooting outside Nationals Park on Saturday night left three people injured, forcing the suspension of the Nats-Padres game as panic erupted amid gunfire heard by thousands within the stadium.

Shots were exchanged between two vehicles in the 1500 block of South Capitol Street SW around 9:30 p.m. Saturday, D.C. police said.

Two occupants of one of the vehicles later appeared at a hospital seeking treatment for gunshot wounds; they are being questioned and are known to law enforcement, Metropolitan Police Department executive assistant chief Ashan Benedict said.

A bullet grazed a fan who was crossing the street nearby as well. All three suffered non-life threatening injuries and are expected to recover.

D.C. Mayor Muriel Bowser and Nationals owner Mark Lerner said in a joint statement on Sunday that the police didn’t believe “the Washington Nationals, the ballpark or fans were the target.”

One of the two cars involved is being processed, Benedict said. The second, a gray Toyota Corolla, sped away and was last seen traveling southbound along South Capitol Street.

D.C. police published surveillance stills of the Corolla on Sunday morning. Officials believe it to have a Virginia temporary tag and a missing hubcap on the rear driver’s side wheel. Anyone with knowledge of the car shown below is asked to contact detectives by calling 202-727-9099 or texting 50411.

The gunshots during the sixth inning, audible on television coverage of the game, caused panic among spectators inside the stadium, many of whom ducked for cover, diving under seats as announcers warned people to stay inside the park.

On Sunday, the attendance for Saturday night was announced at 33,232.

Footage posted to social media showed frightened fans — including children — scrambling for shelter, toppling tables in the bar and crowding into the Padres’ dugout.

Frightened Nationals fans took cover at the report of what *sounded like* shots at Nats ballpark. But staff are telling us the incident was outside the stadium, and they’re keeping everyone inside. People hid behind bar, toppled tables to hide. pic.twitter.com/bCAP2V3qyu

The Nationals initially announced there had been an incident outside the stadium, and posted a message on the scoreboard telling fans to remain inside.

About 10 minutes later, the team tweeted: “A shooting has been reported outside of the Third Base Gate at Nationals Park. Fans are encouraged to exit the ballpark via the CF and RF gates at this time.”

Dave Snyder, a member of the Falls Church City Council and chair of the National Capital Region Emergency Preparedness Council, was at the game, and told WTOP he heard the noise and said people around him knew, “frankly immediately, what it was. Everybody ducked under their seats; some ran.”

They weren’t sure whether the shots were coming from inside or outside the stadium, and because of that confusion, some didn’t know which way to go. “Regrettably, some people ran actually in the wrong direction. So that’s the kind of thing we need to look at and correct in the future.”

WTOP’s Dan Friedell, who was working the game in the press box, said that he had “never seen anything like this.”

Friedell reported that, at first, there was a thought that the commotion was due to nearby thunderstorms. But that perception changed quickly when tons of fans began heading toward the exits.

“Next thing we know, we can see hundreds, perhaps thousands of fans, leaving their seats behind the center field bullpen and the San Diego Padres bullpen — running toward the center field exit … it’s just completely unclear. It was very chaotic,” Friedell said.

Hope everyone is safe at Nationals park. I heard a few loud bangs and then a mass exodus. View from my roof pic.twitter.com/MA1B7z83u2

“We saw people in the second deck, ducking below the concrete in the front of their section,” Friedell said, adding that people ran toward the tunnels behind home plate often seen during TV coverage of the game.

WTOP technology manager Brian Oliger, who was at the game, said the “sounded like fireworks exploding behind our seats in Sec. 115, followed by lots of panicked, scrambling fans, and the players were immediately pulled off the field.”

WTOP Capitol Hill correspondent Mitchell Miller was sitting on the left-field side of the stadium, and at first wasn’t sure where the shots were coming from.

“It wasn’t clear whether or not it was inside the stadium or outside the ballpark, but what was clear is everyone was concerned and scared,” Miller said.

“There were people running up and down the aisles. They were worried about a possible mass shooting; there was a woman within a couple of seats for me who was crying.”

Arman Ramnath, 27, from Arlington, Virginia, said he and a friend were sitting on the third-base side when they heard what sounded like fireworks.

“We weren’t sure what it was. Then everyone started ducking,” Ramnath said.

Ramnath said he and his friend ended up hiding behind the seats for five or more minutes. After a while, people started getting up and leaving, he said, but stadium announcements told fans to wait. Eventually they were allowed to leave.

“It felt very surreal. I wasn’t really sure how to react,” Ramnath said. “I mean, you hear about it … but you never expect it to be something that could affect you.”

“Tickets and parking passes for the regularly scheduled game may be used for admission to both of (Sunday’s) games,” the Nationals said in a statement.

The shooting comes as D.C., like many other cities in the U.S., is facing a rising number of violent crimes and homicides. A 6-year-old girl was killed and five other people were wounded in a shooting Friday night about three miles from Nationals Park.

“This region, this city [and] this nation has a gun violence problem,” Snyder said. “And the sooner we have an uncomfortable conversation about that, the sooner we’re going to prevent this kind of thing from happening again. And it inevitably will, the way things are going now.”

Bowser and Lerner said in the statement that they “stand together against senseless acts of gun violence in the city we love. Gun violence — no matter where it occurs in our city — is unacceptable and will not be tolerated.”

The Associated Press and WTOP’s Rick Massimo contributed to this report.