Wounded dog rescued after chewing through abandoned crate in DC

A dog was found abandoned and injured on the side of the road in D.C., and a local organization is offering a reward for information in the case.
Listen now to WTOP News WTOP.com | Alexa | Google Home | WTOP App | 103.5 FM
(1/4) 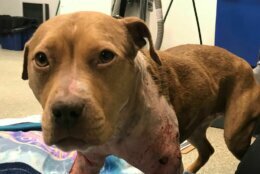 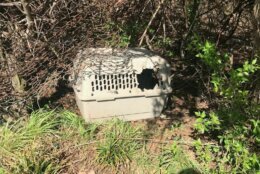 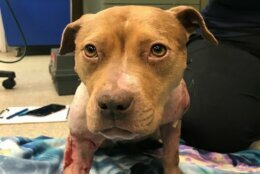 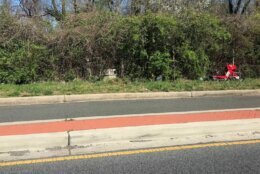 A dog was found abandoned and injured on the side of the road in D.C., and a local organization is offering a reward for information in the case.

The Humane Rescue Alliance received a call on Monday about a young dog with open wounds wandering along Jay Street in Northeast D.C.

“They found her with multiple bite wounds all over her body in a pattern consistent with organized animal fighting,” Thomas Ingle, a humane officer with the organization, told WTOP.

He said that they took her in, treated her wounds and named her Gilly. The organization says that she is recovering well.

He said there was a dog crate nearby, and that she had chewed a hole in the side of it to escape.

“It is somewhat of a miracle story that she was able to break free on her own and end up coming here in the just in time for us to be able to save her,” Ingle said. “It’s amazing; if she stayed in that crate and wasn’t able to get out like that, it’s not clear whether this person would have seen her.”

When she arrived at HRA’s medical center, the organization said, Gilly’s temperature was abnormally low and that some of her wounds were as fresh as one week old. They said there was older scarring as well.

HRA’s Humane Law Enforcement team has launched an investigation and are looking for anyone who may have noticed anything unusual in the area where Gilly was found on or before Monday.

Anyone who recognizes Gilly or has information about the person or persons responsible for her injuries is encouraged to call 202-723-5730.

“Gilly suffered excruciating pain, likely over a period of time, and it’s doubly horrifying to think this was all for someone’s entertainment,” said Lisa LaFontaine, CEO and President of the Humane Rescue Alliance.

The organization is offering a $5,000 reward for information leading to the identification, arrest and conviction of those responsible.