The senior-aged pitbull was rushed into emergency surgery and is now recovering in the care of a foster home, officials said.
Listen now to WTOP News WTOP.com | Alexa | Google Home | WTOP App | 103.5 FM
(1/3) 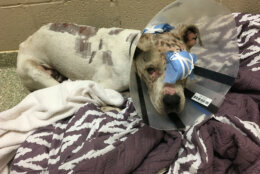 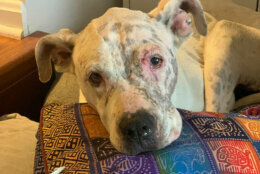 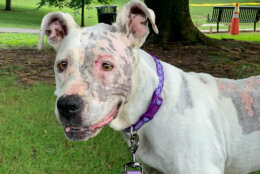 Authorities in D.C. say they are “in desperate need of tips” in the case of a dog stabbed several times and left for dead near the Fort Totten Metro tracks earlier this month, and a reward in the case has doubled to $10,000.

Officers with the Humane Rescue Alliance found Ladybell, a senior-aged pitbull, near the Metro tracks in Northeast D.C. on July 12. She was emaciated and suffering grievous injuries. A deep wound above her left eye was swarming with maggots, and she had stab wounds on her face and the back of her head, the animal rescue group said.

Ladybell was rushed into emergency surgery and is now recovering in the care of a foster home, the group said.

The Humane Rescue Alliance initially offered a $5,000 reward for information in the case, but on Wednesday, the Animal Legal Defense Fund matched that reward, bringing the total to $10,000.

“Violence against companion animals is one of the strongest predictors for other crimes and violent acts,” said Animal Legal Defense Fund Executive Director Stephen Wells in a statement. “We’re hopeful that the local community will come together and share any information they have to hold Ladybell’s abuser accountable.”

An update from Humane Rescue Alliance last week said the medical team discovered Ladybell is also a host of other underlying conditions, including hip dysplasia, several rotting teeth, arthritis and a spinal injury, but that she has been moved to a foster home where she is receiving around-the-clock care.

“Less than three weeks ago, Ladybell was on the brink of death. Now, she’s living comfortably in an HRA foster home and continues to flourish,” the group said in a Wednesday email update.

Ladybell is not currently available for adoption because of the open animal cruelty investigation.