Several dozen homeless people who had been living in tents beneath a K Street Northeast underpass have relocated after the city cleared the area.
Listen now to WTOP News WTOP.com | Alexa | Google Home | WTOP App | 103.5 FM

It was home to dozens of people living in tents under an underpass on K Street Northeast, near Union Station. Now, the tents have been removed, the sidewalks have been cleared and most of the homeless people have relocated one block away to a similar underpass.

Earlier this month, D.C. announced the underpass would be cleared permanently because of safety concerns, as pedestrians had to walk into the street in some cases to pass the tents, chairs, boxes and other items serving as homes.

On Thursday morning, employees with the District Department of Public Works used rakes, shovels and a front loader to load a garbage truck with unclaimed personal belongings and trash that lined both sidewalks beneath the bridge that carries trains to Union Station.

In the past several days, most of the homeless people had moved to the L Street underpass.

As heavy equipment and crews stood by, Mike Harris, who was homeless and in a wheelchair, said he could understand the District’s position.

”Since some people were disrespectful with the location of their tents or lawn chairs, people weren’t able to move about the sidewalk freely and safely,” Harris said. “So the city, rightly so, decided to shut K Street down.”

Harris, who has lived under the bridge for eight months, said he hopes this will be his final move. He has secured a voucher through the nonprofits Community Connections and Pathways to Housing and will move into an apartment shortly.

”We are American citizens,” Harris said. “We just want to lay our heads somewhere.”

Minutes after people’s belongings were loaded into trash trucks, the District’s Nuisance Abatement Graffiti Team power-washed the sidewalks, removing any visible evidence the underpass had, until Thursday, been a temporary home. 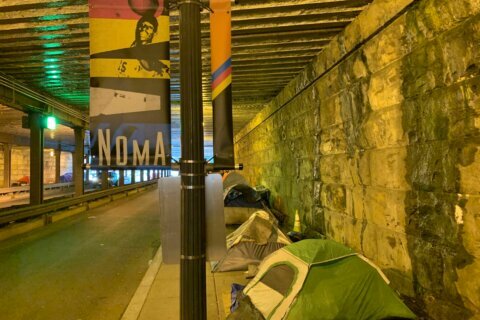