‘He wanted to kill her’: Ex attacked female guard, her co-worker at National Shrine, prosecutors say

Two National Shrine guards were injured Tuesday in an attack that the police said was committed by the ex-partner of one of the victims. Court documents outline what took place.

Tuesday morning’s assault on two National Shrine security officers involved an ex who thought one victim was in a relationship with the other, according to D.C. Superior Court documents.

Dorsey Lee Mack III, 48, faces two counts of assault with intent to kill while armed in connection with the attack at the Basilica of the National Shrine of the Immaculate Conception in Northeast D.C.

Documents detail how Mack twice ran over a female guard — the mother of his daughter — with his SUV, then chased the male guard into the basilica. Inside, the two wounded each other in a knife fight, authorities said, before Mack fled.

Mack was later arrested at his Northwest D.C. home following a brief standoff.

The female guard, identified as “V-1” in the documents, suffered a fractured back, internal bleeding, and a broken wrist and ankle. The male guard, “V-2,” suffered wounds to his face and chest as well as a facial fracture.

Both are reportedly in stable condition and are expected to recover.

Authorities said that Mack attacked the pair around 9:15 a.m. Tuesday.

“V-1 described that she and V-2 were walking in the parking lot when they noticed [Mack] in his vehicle,” court documents said. “[Mack] then attempted to strike V-2 with the vehicle but instead struck V-1.”

One witness told authorities that Mack then made a U-turn and struck the woman again. “The suspect then stopped his vehicle, got out and chased after V-2,” prosecutors said.

Inside, Mack allegedly attacked the male guard with a knife. That was dropped, police said, and the guard picked it up to defend himself as Mack pulled a second knife. The two fought and were eventually separated; the attacker fled.

Both victims identified Mack as the attacker. When investigators arrived at Mack’s home in the 1300 block of Sheridan Street Northwest, he barricaded himself inside.

His daughter urged him over the phone to surrender, and one officer “stated that the daughter had the phone on speaker when she called [Mack] and … the suspect can be heard stating, ‘I tried to kill that b—h.'”

The female guard told authorities that Mack “had been threatening to kill her” over the last few days “but had told her that he changed his mind because they have a child in common.” In addition, she alleged Mack had put spy software on her phone to monitor calls and text messages.

The victim also told authorities she was not in a relationship with her co-worker.

“V-1 described that [Mack] did not find anything that would indicate she was in a relationship with V-2, but [Mack] was still very upset and constantly stated he wanted to kill her,” prosecutors said.

Mack, who himself sustained superficial wounds during his alleged attack, is being held without bond. His next court appearance is set for Jan. 10. 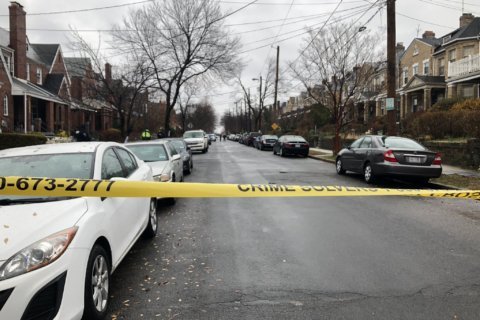