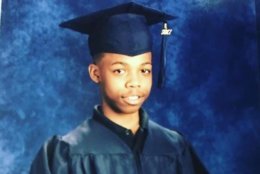 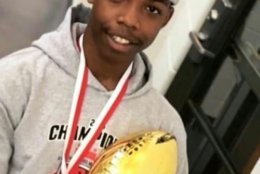 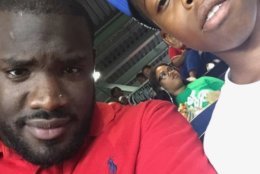 WASHINGTON — A 15-year-old boy was chased into the stairwell of a Southeast D.C. apartment building Thursday afternoon and shot multiple times by a pair of masked gunmen, police say.

D.C. police identified the victim as Gerald Watson of Southeast, Friday morning in a news release.

Police responded to the 2900 block of Knox Place after getting reports of sounds of gunshots around 3:30 p.m. Thursday. When they arrived, they found Watson suffering from multiple gunshot wounds.

Watson was taken to the hospital, but he was pronounced dead.

“We don’t want to see any life lost,” Newsham said. “But a 15-year-old kid who’s going to school, a kid with promise?”

Newsham said detectives are reviewing surveillance cameras along area where it took place on, near the D.C. border with Maryland, for any additional details about the shooters, who ran off after the attack.

“We’re asking the public if they know anything about the two suspects involved, to let us know. Probably someone saw them,” Newsham said. “It doesn’t make any sense … Who’s going to shoot a kid? We’re out here in the holiday season, it’s supposed to be a celebratory time, and now the family of a young kid is devastated about losing their son, nephew and grandson.”

Police are offering a reward of up to $25,000 to anyone who can provide information that leads to the arrest or conviction of the person responsible for any homicide in D.C. Anyone with information on this incident should call police at 202-727-9099. Anyone who would like to submit information anonymously can submit tips by texting 50411.