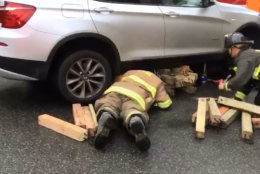 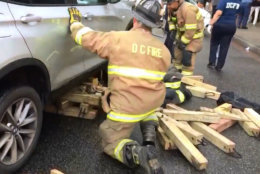 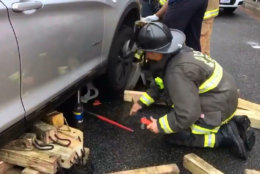 WASHINGTON — Police have identified the man who was struck Friday morning while on an electric scooter in Dupont Circle and later died.

Carlos Sanchez-Martin, 20, of Silver Spring, Maryland, was riding on the scooter going westbound in Dupont Circle at Massachusetts Avenue Northwest when he was hit by a BMW X3 just after 10 a.m., D.C. police said Friday night.

Sanchez-Martin was taken to a hospital where he later died.

D.C. Fire and EMS tweeted videos that showed firefighters working to free the man who had become trapped under a silver SUV.

#DCsBravest have extricated an adult male who was trapped underneath a vehicle at DuPont Circle NW. victim transported with critical life threatening injuries. pic.twitter.com/S3srzNyQ0q

D.C. police tweeted around 12:30 p.m. that all traffic at Dupont Circle near the intersection with New Hampshire Avenue was being blocked from entering the circle until further notice.