The National Zoo's giant panda Mei Xiang appears to be in heat, and zookeepers are making preparations for the small window of opportunity they have to get her pregnant.
Listen now to WTOP News WTOP.com | Alexa | Google Home | WTOP App | 103.5 FM

WASHINGTON — The National Zoo’s giant panda Mei Xiang appears to be in heat, and zookeepers are making preparations for the small window of opportunity they have to get her pregnant.

Female giant pandas are able to conceive for barely 36 hours each year in the spring, usually some time between the months of March through May, according to the Smithsonian’s National Zoo and Conservation Biology Institute. Once the pandas are ready, zoo staff want to give Mei Xiang and the zoo’s resident male panda, Tian Tian, a chance to breed naturally.

“The pandas haven’t successfully bred in the past, but we still give them the opportunity,” Laurie Thompson, assistant curator of giant pandas, said in a news release.

Zookeepers noticed Mei Xiang showing signs of restlessness, sloshing around in a pool of water and calling out to Tian Tian — indicators of the 18-year-old panda being in heat.

After Mei Xiang and Tian Tian are given a chance to breed naturally, the two giant pandas will be separated for their protection.

Since pandas are such solitary animals, they would likely be aggressive toward each other after their hormones start to decrease, zoo officials said.

It would take a few months to determine whether Mei Xiang became pregnant in this cycle. If she were to become pregnant, her cub would be born around the end of September, zoo officials said.

She may experience a pseudo or false pregnancy, during which she would act as if she were pregnant, but not actually birth a cub. 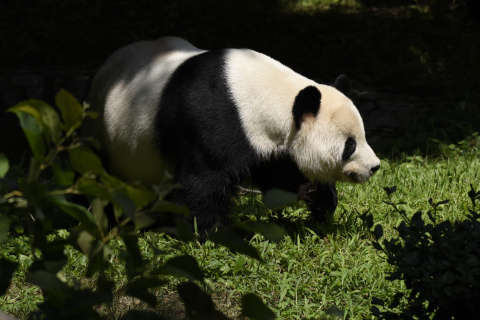