Spencer and his group were at Lafayette Square outside the White House Saturday protesting the strike against Syria. Counter-protesters under the anti-fascist heading confronted them, The Washington Post reports.

The two opposing groups hurled chants and insults against each other. Spencer’s group shouted “Commies go home,” which prompted the response, “Nazis go home,” according to a report by BuzzFeed. Other, more strongly worded parlance was uttered during the confrontation.

Spencer is a supporter of Trump’s campaign promises, including the building of a wall between Mexico and the U.S. But he told The Washington Post that his group would oppose military intervention in Syria.

U.S. Park and D.C. police separated the opposing protesters, about 50, but a video shows that there was at least one, small skirmish between the two groups.

After the protest, Spencer walked away, escorted by police amid counter-protesters, saying he had to get an Uber. He said on social media that the cab he caught was surrounded by protesters that the driver had to abandon the vehicle. He caught another cab.

Spencer garnered attention when he was punched in the face by a protester during a live interview with the Australian Broadcasting Company during Inauguration Day. After Donald Trump won the presidential election, Spencer was caught on film leading a crowd in Nazi-style salutes.

Spencer is president of the Arlington, Virginia-based National Policy Institute, a think tank devoted to racial separation. It is listed as a hate group by the Southern Poverty Law Center. His move to an Old Town Alexandria neighborhood raised objections from residents. 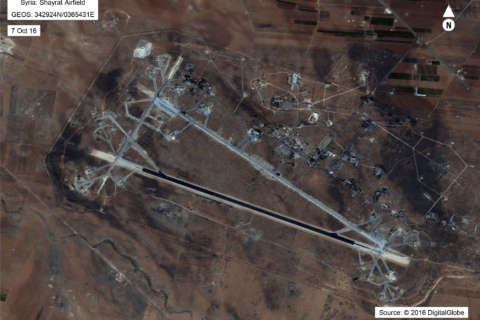