A delivery man was carjacked on Thursday outside a pizza shop in the Tenleytown area of D.C., and the police are still looking for his car.
Listen now to WTOP News WTOP.com | Alexa | Google Home | WTOP App | 103.5 FM
(1/2) 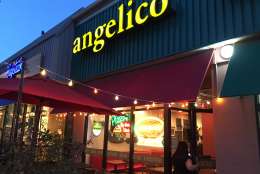 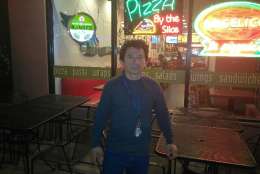 WASHINGTON — A delivery man was carjacked Thursday outside a pizza shop in the Tenleytown area of D.C., and the police are still looking for his car.

Rigoberto Argueta, 46, of Washington told WTOP that he was parked in the alley behind the Angelico pizza shop at 4529 Wisconsin Ave. NW at around 1 p.m., loading food and drinks into his car, which still had the keys inside. He went inside to get more items to deliver, and when he came back out a man blocked Argueta’s way to his car, jumped in and drove off.

Argueta said he tried unsuccessfully to prevent the man from closing the driver’s door, then ran after the car for about a half-block, shouting at the man to stop. He went back into the shop to call the police.

He said the car is a purple four-door 1995 Toyota with slight damage to the passenger-side fender and a black and blue interior, with D.C. license plate 9CT3935.

“I was kind of shocked, because it’s a fairly safe area,” said general manager Tayfun Uzun.

He said that he tells his drivers to be careful, and that something similar happened to a driver in another Angelico location. “They have to be careful, and make sure they don’t carry a lot of money.” Drivers just carry enough to make change, Uzun said — otherwise, they’re targeted.

Argueta continued to make deliveries Thursday night, renting a car to continue to work. He said he’ll wait about a week to see whether his car turns up, then he’ll buy another one. “When something happens to you and you go sit down in your house, you feel more stress. In here, I [look around] and see people and let it go a little bit.”

That kind of dedication doesn’t surprise Uzun. Argueta has been at Angelico for five years.

“My drivers are very good people,” Uzun said. “They care about their business, what they do, and this store they work for. I’m happy to have them. They take it seriously. People think it is [easy]. … But it’s really stressful, actually.”

Argueta said the experience hasn’t soured him on the area: “I really love Tenleytown,” he said. “You never know when something can happen. You’re never ready for a bad thing, but when it happens, you have to take it in a good way.”

“There are a lot of good people around here.”