Edgar Maddison Welch, 28, of North Carolina, said in a video interview with The New York Times published Thursday that he drove to D.C. on Sunday intending only to take a "closer look" at the restaurant, then return home.
Listen now to WTOP News WTOP.com | Alexa | Google Home | WTOP App | 103.5 FM

WASHINGTON – The man who fired a gun inside Comet Ping Pong on Sunday said in an interview that he “wanted to do some good, and went about it the wrong way.”

Edgar Maddison Welch, 28, of North Carolina, said in a video interview with The New York Times published Thursday that he drove to D.C. on Sunday intending to take a “closer look” at the restaurant, then return home.

Comet was the focus of a fake news story that claimed a child sex ring was being run in the basement of the restaurant, owned by a man who has been connected with Hillary Clinton’s presidential campaign.

Welch said he wanted to “shine some light” on what was said to be going on at Comet, but confessed to The Times that “the intel on this wasn’t 100 percent.” Still, he wouldn’t say the claims in the articles were totally false, saying only that there were no children being abused “inside that dwelling.”

He added that he has tattooed on his back the Bible verses: “Even youths grow tired and weary, and young men stumble and fall; but those who hope in the Lord will renew their strength. They will soar on wings like eagles; they will run and not grow weary, they will walk and not be faint.”

Welch never said why he felt it necessary to bring a gun inside Comet, The Times reported, adding that Welch told them he voted for neither Clinton nor Donald Trump in the recent presidential election.

Welch said he acted in haste and that “I regret how I handled the situation.”

In Washington, court documents say Welch fired an AR-15 rifle multiple times inside the restaurant but later exited with his hands up.

In April 2013, Welch was charged with impaired driving with a blood-alcohol content of .09, North Carolina court records show. He pleaded guilty, was sentenced to probation and community service and underwent alcohol counseling. In October, he struck a teenaged pedestrian with his car in his hometown of Salisbury; he wasn’t immediately charged.

Welch appeared briefly in D.C. Superior Court Thursday morning. His attorneys asked for, and were granted, a continuance to prepare for the scheduled preliminary and detention hearing.

The Associated Press and WTOP’s Neal Augenstein contributed to this report. 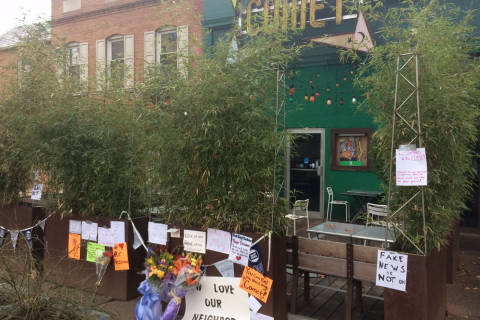