As Congress returns to Washington after the July Fourth holiday and gears up for another fight over gun control, local parents marched to the U.S. Capitol to urge lawmakers to enact stricter gun laws.
Listen now to WTOP News WTOP.com | Alexa | Google Home | WTOP App | 103.5 FM

WASHINGTON — As Congress returns to Washington after the July Fourth holiday and gears up for another fight over gun control, local parents marched to the U.S. Capitol to urge lawmakers to enact stricter gun laws.

House Republicans are set to introduce a measure this week that would allow federal authorities to prevent suspected terrorists from buying guns, but only if they could prove in court within three days that the suspect was planning to engage in terrorism.

But Democrats believe it doesn’t go far enough and they say they will oppose it. Hannah Schardt says she agrees and wants Congress to pass stronger gun legislation.

After the Orlando mass shooting, Schardt and a friend created the group D.C. Moms & Dads for Rational Gun Safety Legislation.

“It felt almost immediately like this could easily be one of those things, like Sandy Hook, that just disappears from the public eye really quickly,” Schardt said.

The group, including dozens of parents and kids, organized a march from Lincoln Park in the Capitol Hill neighborhood to the U.S. Capitol Tuesday morning.

The group is advocating for background checks on all gun transfers, more gun violence research, and for Congress to stop interfering with D.C. gun legislation.

“We wanted to remind Congress that local eyes are on them and we’re not going to let the gun issue just disappear over the Fourth of July break,” she said. “We wanted not only to let Congress know, but also remind ourselves and our neighbors that we’re here and we can actually do something about it even if we don’t have a vote in Congress.”

A push from Prince George’s Co. for tougher gun laws 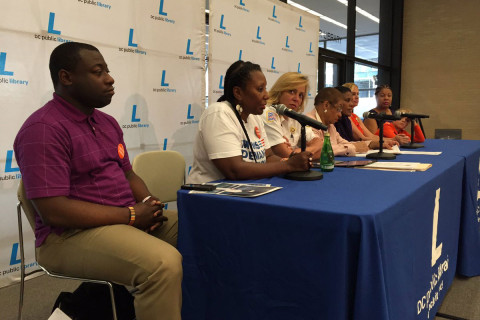 People touched by gun violence speak out in DC