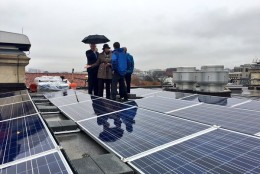 WASHINGTON — Dozens of D.C. government buildings are getting solar panels installed onto rooftops and parking garages in what the mayor calls one of the largest municipal on-site solar projects in the United States.

“We add this to [July’s] groundbreaking deal about purchasing wind energy to power our own buildings,” D.C. Mayor Muriel Bowser said.

The new solar power purchase agreement, Bowser says, “doubles down” on her administration’s commitment to renewable and sustainable energy.

“Forty percent of the energy that we use in government buildings will be provided by renewables,” Bower said.

Using solar power to help run city buildings is expected to save D.C. taxpayers more than $25 million over the 20-year solar power purchase agreement, according to a city news release.

The solar panel project is also expected to generate 140 jobs — 85 of which will be in construction.

“The immense scale of this solar acquisition reduces District energy costs, serves as a business model for other city governments to replicate and unequivocally prioritizes investment in the clean energy economy,” Mark Chambers, director of sustainability and energy at the D.C. Department of General Services, said in the release.