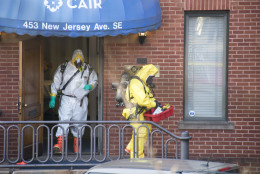 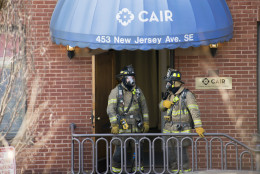 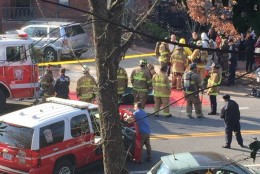 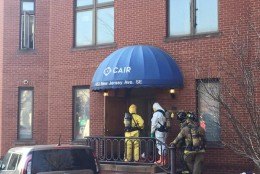 WASHINGTON — A white powder mailed to a Muslim advocacy group’s D.C. office is now in FBI custody after the unknown substance and an accompanying hate letter caused the building to be evacuated Thursday afternoon.

The powder substance and letter were delivered to the Council on American-Islamic Relations office located at 453 New Jersey Ave. in Southeast Thursday afternoon. The envelope, which was addressed to an employee who had not worked there for about two years, came in the regular post office mail, says CAIR National Communications Coordinator Nabeelah Naeem.

Three employees were exposed to the powder and were held in the building while the rest of the employees — about 20 people — were evacuated.

Officials gave the all-clear about an hour after the initial evacuation.

Preliminary tests show the powder is benign, and contains a substance similar to talcum powder or baking soda. Lab tests will determine if those exposed are at risk, but results won’t be released for about a week, according to authorities.

“As a major civil rights organization, we are very, very concerned when we see any foreign substance, especially with a hate message with it, so we immediately become concerned and contact the authorities,” Awad says.

Awad says the advocacy group is used to getting threats.

“It’s very unfortunate to say that we are used to them, but we take every threat seriously, especially when it comes to physical harm or death threats,” he says.

It is not yet clear who mailed the envelope, but Awad says he has a message for whoever sent it.

Below is a map of the location near the incident: