How soon will supersonic jets return to our skies?

A new era of supersonic flight might be just around the corner. Concept planes Aerion AS2 and Boom Overture are leaders in the field and could be brought to market by 2026.
Listen now to WTOP News WTOP.com | Alexa | Google Home | WTOP App | 103.5 FM

A new era of supersonic flight might be just around the corner, but there are three challenges to overcome when it comes to flying faster than the speed of sound.

Those are the three Es of aviation: engineering, environment and economics.

Concorde, the aeronautical marvel that made its last flight 16 years ago this week, only conquered the first of those three travel challenges.

The world’s slinkiest airliner could transport passengers across the Atlantic in less than half the time taken by other commercial aircraft, but it still had ecological shortcomings and high operating costs.

Now at a time when carbon emissions and our planet’s well-being are in the spotlight, can a return to commercial supersonic flight really be sustainable, profitable for airlines and manufacturers, and affordable for passengers?

There are two US companies that certainly think so, and they’re going full throttle with plans to bring supersonic airplanes to market by the mid-2020s. The journey times suggested are as short as New York to London in three hours, 15 minutes.

One is targeting airlines, the other the executive jet market, and they’ve both got different solutions to one of the major environmental sticking points of supersonic flight: how to manage the sonic boom.

“Concorde was a brilliant piece of machinery, a noble experiment, but it put too much emissions in the environment, too much noise into our communities, and was too expensive to operate.

“What we’re trying to do is very different,” Tom Vice, chairman, president, and CEO of Aerion Corporation tells CNN.

The firm is developing the 8-12 passenger AS2 supersonic jet at its Reno, Nevada, headquarters.

Compared to regular flights, the AS2, traveling at Mach 1.4 (more than 1,000 mph), promises to shave three and a half hours off the journey from New York to Cape Town, and more than four hours off trips between JFK and Singapore and JFK and Sydney.

Aerion has already secured a launch customer, fractional jet ownership and leasing company Flexjet, with an order for 20 aircraft. The AS2’s first flight is slated for 2024 and the company intends to take the plane to market in 2026.

The AS2 has a price tag of $120 million, which the planemaker thinks is a price that people will pay because of the time savings.

But Aerion’s ambitions are also for the aircraft to operate benignly in the skies: “The world can’t wait until 2050 to become carbon neutral. We have to do this today,” says Vice.

Partners in Aerion’s AS2 program include GE, which debuted its Affinity supersonic engine last year, and Spirit AeroSystems, which is making the AS2’s pressurized fuselage.

In the cockpit, Honeywell is revolutionizing the flight deck, using its expertise in supersonic military jets to design the AS2’s mission processors, displays, sensors and flight control systems.

“We had to design an aircraft that was incredibly efficient with the lowest fuel-burn possible, so we spent 10 years thinking about advanced aerodynamics and fuel-efficient engines. We’ve designed specifically around noise and emissions,” says Vice.

One of the things it won’t have — which Concorde had — is afterburners, a system whereby fuel is sprayed into the engine’s exhaust and burned to increase thrust during takeoff and acceleration.

“We ruled that out because it’s too noisy and puts too much emissions in the environment,” says Vice. “The second thing we thought about was our energy source. We wanted an aircraft that wasn’t dependent upon fossil fuels and that could operate on 100% synthetic fuels from day one.”

The company is also committed to a substantial reforestation program to assure carbon offsets for every customer on every flight.

Then there’s noise. Vice says that the AS2 is designed to meet Stage 5 Airplane Noise Standards, the most stringent landing and takeoff noise regulations. “We think we’ve solved that problem,” says Vice. “Our aircraft is going to be as quiet as other airplanes around airports.”

But perhaps one of the AS2’s most innovative features is its “boomless cruise” which allows the plane to fly supersonically over land without the boom striking the ground. Instead, the noise gets refracted back up into the atmosphere.

Aerion invented “boomless cruise” because the alternative type of quieter supersonic flight, called “low boom,” while less noisy than Concorde, still produces noise on the ground similar to the rumble of distant thunder.

Vice is keen to prove the new technology can work and “once regulators see that we can do that reliably, we’ll have the first aircraft in history that can fly supersonic over land, and nobody on the ground will hear the boom.”

“We analyzed how business owners fly. We looked at a company out of New York that flew business jets around the world, and when we substitute an AS2 for them and rerun those flights for every person who flew on their airplane, AS2 saved them 142 hours a year,” says Vice.

Beyond the AS2’s first commercial flights in 2026, Aerion is doing some family planning; an AS3 airliner is in the pipeline. Future plans also include hybrid-electric supersonic planes, and in the much longer term, a fully electric supersonic aircraft, the ASX, is envisaged.

However, Aerion says the technologies needed to make this possible might take decades to mature.

What price can we put on time?

A seat on Concorde cost around four times the cost of a business class seat — but Concorde wasn’t a business jet.

How deep into their pockets might a busy executive go in order to zip faster through the stratosphere on a supersonic charter flight?

Rather than speculate, a leading broker of on-demand business jet travel has identified a correlation between offering extra speed and willingness to pay more, based on their customers’ propensity to specify faster and costlier jet planes when they’re making a booking.

“We know our clients will pay more to arrive thirty minutes faster on a four-hour sector. What’s important to private jet customers is speed,” says Adam Twidell, CEO and founder of PrivateFly, a global booking service for private charter flights.

Time-saving is intrinsic to PrivateFly’s raison d’être. In a recent booking a client chartered a jet to fly from the Caribbean to London, stayed on the ground for three hours to view a property, then flew back home.

“I think private jet customers will pay twice as much for twice the speed,” he says, “but they’ll also want the badge of honor that they’ve flown supersonic. This what happened on the Concorde.”

But the kudos of flying supersonic won’t just be confined to the prestigious end of the charter market.

In Denver, Colorado, a 55-75 seater supersonic airliner named Overture is shaping up in the hangar of Boom Supersonic.

The aircraft, designed to cruise at Mach 2.2 (1,451 mph), has a price tag of $200 million, and has already garnered $6 billion worth of pre-orders for 10 Overtures from Virgin Group and 20 from Japan Airlines. Japan’s national airline also invested $10 million in Boom in 2017.

“Overture is moving through the design phase, where its key technologies and specifications are being developed and refined,” Blake Scholl, founder and CEO of Boom Supersonic, tells CNN.

“Many of the key components have already undergone several successful tests, including testing our engines with sustainable alternative fuels. Overture will begin flight testing in the mid-2020s. We’ve already executed successful engine tests using pure biofuel and are designing our aircraft to accommodate alternative fuels”.

Earlier in 2019 the company formed a partnership with Prometheus Fuels, a company that’s using clean energy to make zero-net carbon fuels out of carbon dioxide that is already in the atmosphere.

Regarding noise, Scholl says that the impact of Overture on airport communities will be similar to the quietest aircraft it replaces.

In addition, Overture flights will focus on more than 500 primarily transoceanic routes that benefit from the aircraft’s Mach-2.2 speeds — such as New York to London or San Francisco to Tokyo.

The plan is that Overture will cruise at subsonic over land, meaning no sonic boom will affect populated areas, and cruise supersonically only over water.

Boom Supersonic estimates that by the mid-2020s market demand will require between 1,000 and 2,000 Overture aircraft in the first ten years after it enters service, representing a $265 billion market.

“On Overture, same-day transatlantic business trips become possible,” says Scholl. “Imagine flying to London in the morning, meeting with business partners during the day, and returning to the US in time to tuck your children into bed.”

“Carriers operating Boom’s airliner will be able to offer profitably fares similar to the business-class, long-haul ticket prices seen today,” claims the Boom CEO. “For a one-way trip from New York to London, this means that the airliner can turn a profit at fare levels around $2,500. Our ultimate vision is to reduce operating costs to make supersonic flight even more affordable and accessible.”

“Thanks to research and customer feedback, we know that time is truly the new luxury,” says Takeshi Morita, director of business creation strategy at Japan Airlines (JAL). “Faster flight times — as little as five and a half hours between San Francisco and Tokyo, for example — will empower our customers with increased flexibility.”

In respect of a service entry date and route deployments, JAL says that the current focus is on evaluating the technicalities, based partly on the forthcoming performance of Boom’s XB-1 test plane.

“We must first confirm the success of the XB-1 currently in production at Boom,” says Morita. “Upon confirmation, we’ll then look toward the scheduled production of the actual aircraft, Overture.

“If proven successful, we will look at which routes are most viable for JAL’s international network.” 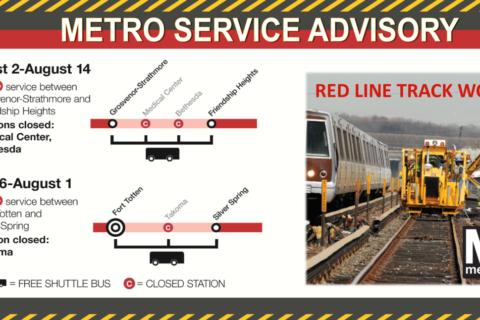 Weekend road and rail: Planned stops on I-66; Red Line work with changes