Coronavirus News: Fairfax Co. votes to increase substitute teacher pay | Is it time to get a COVID-19 booster? Which one? | Local cases of COVID-19 | How many in DC region are vaccinated?
Home » Transportation News » Work begins on new…

Work begins on new I-270 interchange

The interchange will be between Gaithersburg and Germantown, north of Route 124. Earlier this month, the northbound and southbound lanes were shifted to create work space for pile driving and excavation.
Listen now to WTOP News WTOP.com | Alexa | Google Home | WTOP App | 103.5 FM

WASHINGTON — Exit 12 doesn’t exist on Interstate 270 yet, but that’s expected to change in the coming years.

The construction of an interchange for Watkins Mill Road has become more apparent to drivers along the so-called “Technology Corridor” in recent weeks, as a new bridge begins to take shape.

The interchange will be between Gaithersburg and Germantown, north of Route 124. Earlier this month, the northbound and southbound lanes were shifted to create work space for pile driving and excavation.

“What we’re doing is pouring the footers in the median strip and of course on the side of the road that will sustain the bridge that’s going to carry Watkins Mill Road over I-270,” said Charlie Gischlar, spokesperson for the Maryland Department of Transportation State Highway Administration.

The $98 million project was announced by Gov. Larry Hogan last summer. Vegetation was cleared and some utilities were relocated over the winter in preparation for the construction.

“Later this summer, we’ll probably be putting the steel beams up, meaning we’re going to have to do some brief 15-minute closures to swing those beams into place and secure them  … that’s still a couple months away,” Gischlar said, adding that most of the work will take place during the overnight hours.

The project is about a quarter of the way to completion. When it opens, MDOT SHA hopes the four-lane overpass and the diamond-shaped interchange will enhance economic opportunities for middle and northern Montgomery County by giving drivers more options and reducing congestion on nearby highways such as Route 355.

“It’s also going to help out on some of the nearby roads like Md. Route 124 and some of the other up-county roads, hopefully taking some of the congestion off of them,” Gischlar said.

The project also includes the construction of a new exit ramp from the southbound lanes of I-270 to Route 124. The new off-ramp will run parallel to the ramps that lead on and off Watkins Mill Road.

The project is scheduled for completion by summer 2020. 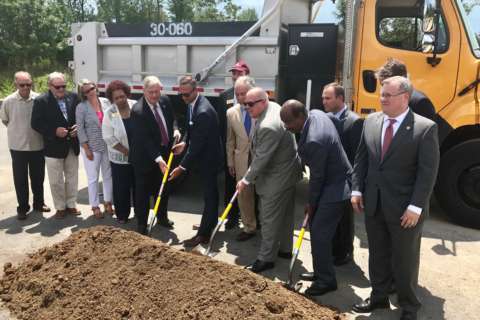 New bridge over I-270 aims to ease Gaithersburg congestion