Torrential downpours and flooding led to an extended closure of the Interstate 95 Express and Interstate 395 HOV lanes Monday morning. For a time, nearly 20 miles of the carpool facility was off-limits to morning commuters, backing up traffic on the mainline for miles.
Listen now to WTOP News WTOP.com | Alexa | Google Home | WTOP App | 103.5 FM
(1/3) 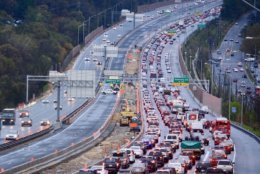 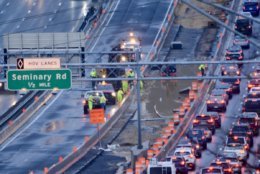 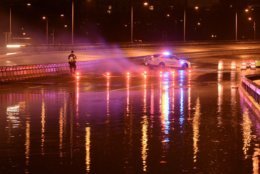 ALEXANDRIA, Va. — Torrential downpours and flooding led to an extended closure of the Interstate 95 Express and Interstate 395 HOV lanes Monday morning. For a time, nearly 20 miles of the carpool facility was off-limits to morning commuters, backing up traffic on the mainline for miles.

Over 2 inches of rain fell across portions of Arlington and Alexandria during the early morning hours. A deep pool of muddy water developed between the Duke Street and Seminary Road exits, forcing authorities to close the I-395 HOV lanes before dawn because of safety concerns.

The high water formed between temporary concrete jersey walls in the long-term work zone set up to convert the HOV lanes to toll lanes. Drainage problems are common during heavy rain in such work areas. Ponding was also reported near the Pentagon and Crystal City exits.

After consultation with Virginia State Police and the Virginia Department of Transportation, Transurban, the operator of the facility, began diverting traffic out of the express lanes at various points north of Prince William Parkway. Tolls were suspended shortly after 8:30 a.m. as long backups began forming in the express lanes.

“We want all of our express lanes customers to have smooth trips, and if that didn’t happen to you today, please get in touch with us at customercare@expresslanes.com,” said Pierce Coffee, spokesperson for Transurban.

The congestion forced many drivers into work-around mode. Surrounding roads were reported as slower than usual.

Kalai Kandasamy, curator of Sluglines.com, said the communication between carpoolers and state officials went very well despite the frustrating delays.

“This is not a way to start the week. Commuters had been sitting on express lanes for about an hour only to know that they were diverting traffic at Edsall [Road]. From there, it took another hour to reach the Pentagon and other D.C. locations,” said Kandasamy.

Many Fairfax Connector and Potomac and Rappahannock Transportation Commission (PRTC) buses were delayed due to the closure.

Flooding also rendered Interstate 66 impassable for a time in Arlington. The highway was blocked between the Spout Run Parkway and Rosslyn exits while crews waited for the water to recede. A few vehicles stalled in the high water. The highway reopened around 6 a.m. but was quickly flooded with bailout traffic from I-95 and I-395. Tolls were in effect inside the Beltway as usual and for a time reached upwards of $46 for solo drivers.

The express lanes were reopened around 10:30 a.m. 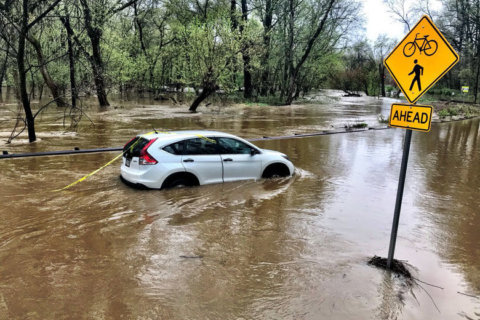 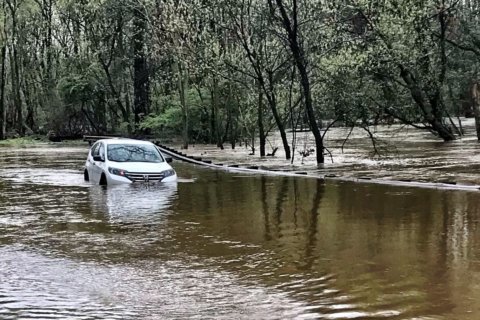 Don’t be ‘that’ driver: How to avoid a water rescue