Holidays: Send in photos, videos of decorations | Holiday TV shows to watch/stream | Steepest price increases for the holidays | December entertainment guide | Where to see holiday lights
Home » Transportation News » How will I-66 toll…

HOV cheaters were a major problem on Interstate 66 inside the Beltway before rush-hour tolls began this week, but Virginia’s transportation secretary is hopeful that the new system will allow those who choose to keep cheating to be caught.
Listen now to WTOP News WTOP.com | Alexa | Google Home | WTOP App | 103.5 FM

WASHINGTON — HOV cheaters were a major problem on Interstate 66 inside the Beltway before rush-hour tolls began this week, but Virginia’s transportation secretary is hopeful that the new system will allow those who choose to keep cheating to be caught.

“The state trooper knows in his car — they have technology that says [whether a driver is] in the flex mode or … in the billing mode, and guess what? We have now revenues to pay for that enforcement,” Aubrey Layne said.

Troopers now only need to check those cars that signal they are driving free with at least two people inside to be sure the drivers are telling the truth.

Estimated violation rates dropped dramatically on Interstate 95 when the HOV lanes were changed to HOV or toll lanes, since drivers who use the lanes without an E-ZPass are automatically sent a bill in the mail with additional charges, while other drivers choose to pay the toll.

“Given the chance, people will pay [the toll]” rather than breaking the rules, Layne said.

The violation rate was up to 50 percent on Interstate 66 under the previous rules, which allowed only cars with two or more people (and traffic to Dulles Airport and certain hybrid cars) between 6:30 a.m. and 9 a.m. toward Rosslyn and between 4 p.m. and 6:30 p.m. toward the Beltway. Layne said that made it too difficult and disruptive to ticket everyone.

“To stop them, there was so many, it would have clogged the roadway up,” Layne said.

Now that Virginia expects fewer violators, police should have an easier time pulling them over. Some of the toll money also goes to pay for the enforcement.

Virginia State Police said data would not be available until next week on how many drivers were pulled over during the first week of tolls and expanded rush hour periods on Interstate 66 inside the Beltway.

VDOT has declined to provide the average toll prices paid by drivers to this point, saying that the billing has not yet been verified.

Posted tolls have ranged from 50 cents for single segments to $40 for six minutes at the height of rush hour for the length of the corridor in the morning rush. The morning tolls peaked much lower than that Wednesday and Thursday.

The number of cars using alternative roads has increased slightly this week. 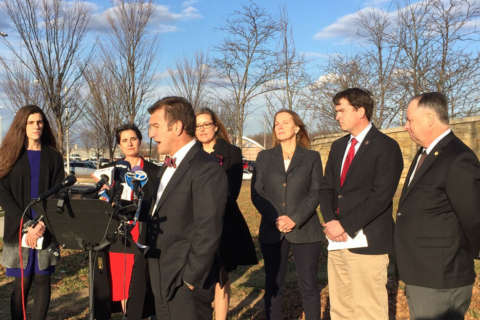