WASHINGTON — For now, Purple Line work will continue as planned after Friday’s ruling from a federal judge.

D.C. District Judge Richard Leon ruled against an effort by Purple Line opponents to stop tree-clearing work along the Georgetown Branch Trail. But the judge said he would rule on whether or not work would continue after a hearing on Sept. 19.

Opponents have already delayed work for years through complaints, lawsuits and more.

Leon issued Friday’s ruling even as one of his earlier decisions in a related case were blocked by an appeals court. Opponents filed their written arguments for that three-judge panel Friday.

Advocates for the line said the repeated challenges to the 16-mile, 21-stop light rail project have driven up costs and led to initially planned features getting cut out of the project. The line is set to connect Bethesda, Silver Spring, College Park and New Carrollton.

Maryland had warned that a one-week delay beyond Sept. 18, when large trees were scheduled to begin coming down, could cost more than $6 million in contract penalties and labor and could delay the line’s ultimate completion. It said a brief delay until Sept. 20 — so the judge could hear more complete arguments — would cause less disruption.

The state’s contract with the private group building and operating the line calls for service to begin in 2022, but that deal was agreed to before Leon’s ruling last year ground work to a halt. The appeals court panel put that ruling on hold this summer, until it can hear further arguments. 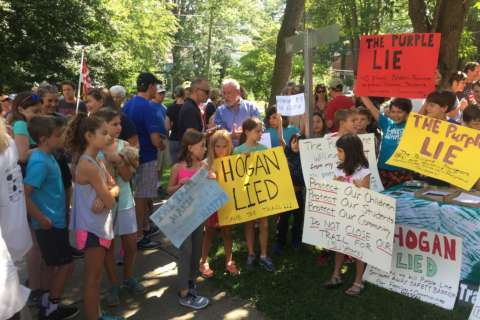 In court filing, Maryland argues for a 2-day delay on Purple Line work