Listen to WTOP this Saturday and Sunday morning during the 8am hour for the WTOP Mystery Newsmaker Contest. We’ll play the voice of someone you’ve heard in the news this week on WTOP.  Be the first caller at 855-885-1035 to correctly identify the mystery newsmaker  and win a pair of tickets to the show of your choice at Capital One Hall as part of the Inaugural Season of Broadway in Tysons presented by The Watermark Hotel. Choose from the 2021-2022 season line-up including Waitress featuring music by Grammy® Award winner Sara Bareilles, a new production of Fiddler on the Roof, and the D.C.-area premiere of An Officer and a Gentleman. 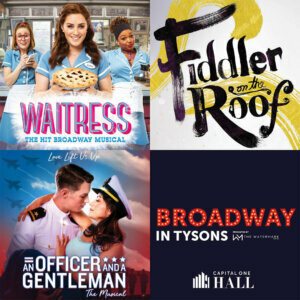 Inspired by the beloved film, WAITRESS tells the story of Jenna, an expert pie maker who dreams of a way out of her small town. A baking contest and the town’s new doctor may offer her a fresh start, but Jenna must summon the strength to rebuild her own life. Don’t miss this uplifting celebration of friendship, motherhood, and the magic of a well-made pie.

Fiddler on the Roof

Tony®-winning director Bartlett Sher brings his fresh take on a beloved masterpiece to life as FIDDLER ON THE ROOF begins a North American tour direct from Broadway. A wonderful cast and a lavish orchestra tell this heartwarming story of fathers and daughters, husbands and wives, and the timeless traditions that define faith and family. To love! To life!

-Broadway In Tysons continued on next page-

An Officer and a Gentleman

An Officer and a Gentleman based on the Oscar-winning film starring Richard Gere and Debra Winger, is a breathtaking production that celebrates triumph over adversity and includes one of the most iconic and romantic endings ever portrayed on screen. Featuring the Grammy Award winning, #1 hit single ‘Up Where We Belong’, and a score based on the 1980’s catalogue of music that gave voice to a generation, the live stage production is a new adaptation by multiple Tony Awards nominee Dick Scanlan (Thoroughly Modern Millie, Everyday Rapture), based on the original screenplay by Douglas Day Stewart. The musical is directed by Scanlan with choreography by Patricia Wilcox (Motown, A Night with Janis Joplin).