Check your charities before making donations

During the holiday season, as many people open their wallets to support their favorite charities, experts warn givers to do their homework first before making that donation.
Listen now to WTOP News WTOP.com | Alexa | Google Home | WTOP App | 103.5 FM

WASHINGTON — During the holiday season, as many people open their wallets to support their favorite charities, experts warn givers to do their homework first before making that donation.

Tuesday is Giving Tuesday, a “global day of giving fueled by the power of social media and collaboration,” and you can find a list of involved charities and giving opportunities in the D.C. area on the Giving Tuesday website.

But experts in the field say to make sure you’re giving to a group that has its priorities straight.

“If you want your money to be helping puppies or sick kids, I think you would be pretty upset to learn your contribution you made went to a fancy conference for the staff or expensive travel,” said Sandra Miniutti, vice president of charity monitoring site Charity Navigator.

Some charities spend a lot more on overhead costs than people realize, said Miniutti, who claims the highest she’s seen involved 90 percent of donations going to things other than the charity’s main mission.

“A good ratio is to look for charities spending 75 percent of their budget on their programs,” she said.

Miniutti added that the only exceptions to that ratio are small charities in your community and brand-new charities that may not have the capacity to be that efficient.

There are a number of websites that go through public filings and post where a charity is spending its money. Charity Navigator is one site; another is Give.org, operated by the Better Business Bureau.

One of the best ways to feel comfortable that donations are being spent wisely, according to Miniutti, is donating to charities close to home.

“The benefit is that you can volunteer for the charity; maybe you want to join the board; you can really see them in action and have that assurance that the charity is doing good things with your money,” Miniutti said.

She also advised giving to a 501c3 charity to ensure donations come with a tax benefit. Proof of a donation is also important for tax deductions, so keep receipts or credit card statements with the donation on it.

December is a popular time for donations, as people look to give before the tax year ends.

“Traffic through our site skyrockets on New Year’s Eve,” she said.

Miniutti said that procrastinators should donate online — it’s the best way to guarantee your contribution gets in before the clock strikes midnight for the new year. 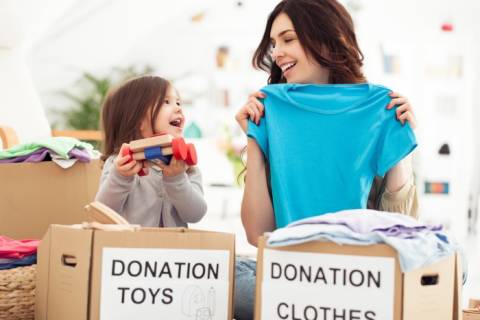 Region’s charitable souls are quite spirited