Bash back better: Here’s what governing by crisis looks like

WASHINGTON (AP) — Washington’s tempestuous week of walking, chewing gum, juggling balls and spinning plates at the same time is giving rise to apocalyptic rhetoric about the state and future of the country.

Four big things are happening at once, all attended by hyperventilation.

It’s a contest to see which side can bash back better. This is what governing by crisis looks like. It may be the only way anything gets done.

The government has essential housekeeping to do this time of year. Yet no deal comes until it absolutely must. Why act at the 11th hour when you’ve got 59 minutes left?

There are a couple of must-do’s.

The government needed a law to keep itself open in the budget year that began Friday morning. That happened, with a few hours to spare. It also needs to raise or suspend its borrowing ceiling to cover current expenses and avoid a default on its debt payments over the next two weeks, something that has never happened.

Then there are the want-to-do’s.

President Joe Biden, many Democrats and a sizable number of Republicans want to build or restore roads, bridges, broadband and more in an ambitious public works package. Biden and many Democrats, but no Republicans, also want to supercharge social and climate spending, potentially costing upward of three times more than the infrastructure one.

Action on that front came to a halt Friday despite Biden’s visit to the Capitol to try to break the logjam between liberal and moderate Democrats over the two packages and get Congress to move on his overall agenda. He said he was confident his agenda would prevail whether it takes “six minutes, six days or six weeks,” though the way forward was murky.

The crises arose, as they typically do in Washington, when one matter was linked to another or another and the things that must be done were held hostage to things lawmakers want done.

A sense of dancing at the precipice persisted all week in a capital with a 50-50 Senate, a closely divided House, a pushy left Democratic flank, obstinate Democratic centrists, gleefully obstructionist Republicans and a president struggling to deliver on his promise to restore competence and normalcy after the Donald Trump years.

In large measure, Democratic moderates want the infrastructure plan, liberals want the ultimate package and Biden wants both. The divisions bared inside the party over this agenda could leave him with neither.

As negotiations with lawmakers proceeded in private midweek, Biden press secretary Jen Psaki joked that the outcome would determine whether the Biden administration was living in an idealistic drama or a farce.

“Maybe ‘The West Wing’ if something good happens,” she said. “Maybe ‘Veep’ if not.”

Republicans hurled their favorite insult with abandon, branding Democrats as wannabe socialists, and leveraged the disarray to try to define Biden as an inept leader.

The House Republican leader, Rep. Kevin McCarthy of California, ticked off the “border crisis,” “inflation crisis,” “labor crisis,” “China crisis” and “foreign policy crisis” as all converging at once. “Democrats want to enlist a bureaucratic army to achieve their goal of a big government socialist nation,” he said.

Words were no less heated on the other side.

House Speaker Nancy Pelosi, arguing for lifting the debt ceiling, accused resistant Republicans of leaving the country vulnerable to a “cascading catastrophe of unbelievable proportions” that could “damage America for 100 years.” Pelosi, D-Calif., was quoting JPMorgan CEO Jamie Dimon in her House speech.

Few doubt that the consequences of a U.S. debt default would be severe. Not lifting the debt ceiling could drive up interest rates on car and home loans, for example. But few expect that to be allowed to happen.

When members of the tea party class of 2011 first threatened debt default, they were outliers. Now, it’s standard operating procedure in the GOP to keep that long-unthinkable threat alive, even if Republicans may not be serious about letting it unfold.

Avoiding default is just one of the procedural steps or routine tasks that have become weaponized in Congress, particularly in the Senate by Republican leader Mitch McConnell of Kentucky, who always exacts a price for cooperating with Democrats even if it’s just to embarrass them.

Partial government shutdowns, though, are a line that lawmakers have been willing to cross. The longest shutdown in history happened under Trump, 35 days stretching into January 2019, when Democrats refused to approve money for his U.S-Mexico border wall. Trump backed down.

Trump’s immigration policy also sparked a three-day shutdown a year earlier. In 2013, a Republican attempt to torpedo money for the Obama-era health law set off a shutdown that lasted 16 days and, as in the other cases, furloughed hundreds of thousands of federal workers.

This time, lawmakers sealed a deal in the last hours to finance the government until Dec. 3, when they’ll have to reckon with it again. Instead of defusing the bomb, Stephen Colbert cracked on “The Late Show,” “they just hit the bomb’s snooze button.”

Some experts in the workings of government see parallels in the 1983 Social Security showdown — undeniably a crisis because the program was only months from insolvency until an agreement was reached.

This is worse, said Paul Light, a New York University professor of public service and author most recently of “The Government-Industrial Complex,” which tracks the operations and scale of government over the last 35 years.

“Back then, you only had to get the speaker, the majority leader, and the president to the table,” he said. “Now it’s 15 heavy-hitters, chosen or self-anointed, who have to sign off.

“These kinds of moments are quite rare,” Light added. “We drift along year after year with declines in the number of bills introduced and passed, but still manage to get the budget done close to on time and occasional bills enacted. This one makes the 1983 crisis seem like child’s play.”

Even as the insults flew this past week, stirrings of agreement could be seen here and there, as could weariness over all the posturing.

On the Democratic divide over infrastructure and Biden’s even bigger plan, Democratic Sen. Mazie Hirono of Hawaii was reaching exasperation.

“It’s that kind of thing where it happens when it happens,” Hirono said. “So meanwhile I say, everybody, get real. Tell us what it is that you can support and we can have something to talk about and argue about and come to a conclusion about.” 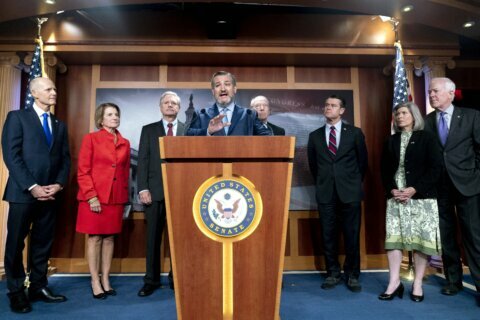