It's way too early to be thinking about the winter holidays, but that's not stopping the unveiling of the official 2021 White House Christmas ornament.
Listen now to WTOP News WTOP.com | Alexa | Google Home | WTOP App | 103.5 FM
(1/4) 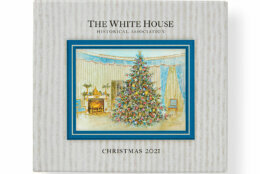 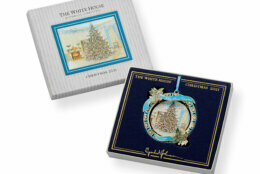 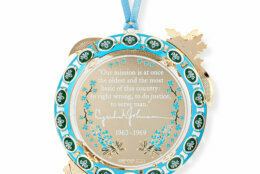 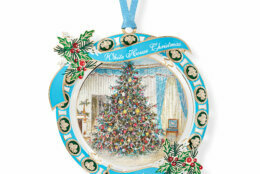 It’s way too early to be thinking about the winter holidays, but that’s not stopping the unveiling of the official 2021 White House Christmas ornament.

The year’s collectible features a painting of the 1967 Blue Room Christmas tree. It commemorates President Lyndon B. Johnson’s time in the White House.

The ornament will bear a quote from Johnson spoken during a joint session of Congress on March 15, 1965, when he called on legislators to support a bill that would protect the right to vote and outlaw discriminatory measures blocking African Americans from voting.

“Our mission is at once the oldest and the most basic of this country: to right wrong, to do justice, to serve man.”

“The quote that the [WHHA] has on the back of the Christmas Ornament does reflect what he felt that his mission was, at once the oldest and the most basic of this country,” said Lynda Johnson Robb, Johnson’s eldest daughter, in a statement.

The speech has come to be known as the “We Shall Overcome Speech” or the “Voting Rights Speech.” It was a response to the violence experienced by Civil Rights activists while crossing the Edmund Pettus Bridge during protest marches in Selma, Alabama, in March 1965

You can watch Johnson’s speech and read the full text on the LBJ Presidential Library’s website.

“For me, it is a very sentimental journey because I had the privilege of a lifetime to witness the signing of the 1965 Voting Rights Act,” Luci Baines Johnson, Johnson’s youngest daughter, said.

Official White House Christmas ornaments have been designed and made by the White House Historical Association since 1981. Ornaments remember a president’s time or significant White House anniversaries.

The quote on the ornament is encircled by Texas bluebonnets, the state flower of Texas, where Johnson is from, and a favorite of Lady Bird Johnson.

You can buy the 2021 Official White House ornament at White House Historical Association online shop. The price is $24.95.

Watch the unveiling below.