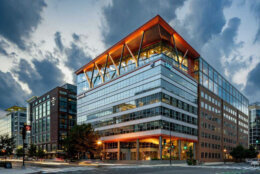 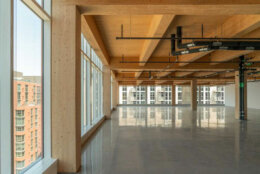 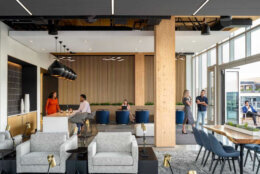 The first office building construction using heavy timber in more than a century in D.C. has been completed.

Columbia Property Trust began work more than a year ago to add three floors atop its existing 80 M St. building in the Capital Riverfront District, using a composite wood product engineered from hard wood grown in the Pacific Northwest and Eastern Canada.

Mass timber has the same structural integrity and fire resistance as steel and concrete.

More than 1,300 tons of mass timber was used for the addition.

The addition includes a new 5,000-square-foot penthouse, lobby and terrace.

Columbia Property has signed 140,000 square feet of new or renewed leases since beginning the addition, including the American Trucking Association, which is relocating its Arlington headquarters to 60,000 square feet in the new addition. Other tenants include BP America, and Walmart Inc.

“Integrating an innovative design, a distinctive blend of materials and finishes, and a rich package of amenities into our renovation of 80 M has proved to attract a range of companies seeking the highest quality office environments,” said Columbia Property’s East Coast Vice President David Cheikin,

Queens, New York-based For Five Coffee Roasters has signed a lease for its fifth D.C. location at 80 M St.