The nonpartisan agency expects the consumer price index to rise 6.1% this year and 3.1% in 2023. This forecast suggests that inflation will slow from current annual levels of 8.3%, yet it would still be dramatically above a long-term baseline of 2.3%.

The 10-year estimates do contain positive news as this year’s annual budget deficit will be $118 billion lower than forecast last year. That’s a byproduct of the end of pandemic-related spending and the solid job growth it helped to spur. As a share of the total economy, publicly held debt will drop through 2023. Still, the accumulated federal debt will likely continue to grow over the next decade to be equal to roughly 110% of U.S. gross domestic product.

The Federal Reserve has been trying to reduce inflation by raising its benchmark interest rates, causing the interest charged on 10-year U.S. Treasury notes to increase substantially in recent months. One consequence is that the government will be spending more money this year to service its debt. By 2032, the yearly interest payments will nearly be $1.2 trillion, or more than what the federal government spends on defense.

Still, the CBO cautions that its numbers “are subject to considerable uncertainty, in part because of the ongoing pandemic and other world events,” including Russia’s ongoing war in Ukraine. The report accounts at least for the first few weeks of the war, according to CBO.

Economists have said coronavirus relief programs issued by both the Biden and Trump administrations have contributed to higher inflation levels. But high prices have also been fueled by a delay in action by the Fed, supply chain disruptions and the tumult produced after Russia invaded Ukraine in February.

Ben Harris, the Treasury Department’s assistant secretary for economic policy, tweeted Tuesday that the factors driving inflation also include soaring corporate profits, driven by a lack of business competition — as well as business not being fully prepared for the reopening of the economy as pandemic restrictions were lifted. The administration has emphasized that its plan put the U.S. economy into a stronger place relative to the rest of the world because unemployment is a low 3.6%.

“The American Rescue Plan has fostered an extraordinarily fast recovery and leaves us in a strong position to address the global challenges posed from supply chains and the economic fallout from Russia’s invasion of Ukraine,” he tweeted.

He said if Congress passed the president’s full agenda, labor force participation would rise and some of the impacts of inflation would be reduced.

With Biden’s $3.5 trillion economic and social spending bill, known as “Build Back Better,” now dead in a split Senate, Democrats face pressure to pass legislation ahead of November midterm elections.

The report says beyond 2032, “if current laws remained generally unchanged, deficits would continue to grow relative to the size of the economy over the following 20 years, keeping debt measured as a percentage of GDP on an upward trajectory throughout that period.”

The biggest drivers of debt rising in relation to GDP are increasing interest costs and spending for Medicare and Social Security, according to the report.

Michael A. Peterson, CEO of the Peter G. Peterson Foundation, said in a statement that “looking ahead, we need to address the key drivers of our debt, which include high healthcare costs, an aging population and a tax code that is inadequate for what we have promised our citizens.”

“Stabilizing our debt will help build a foundation for broad-based economic growth and make us better prepared for the challenges and opportunities of the future,” he said.

CBO Budget Director Phillip Swagel is set to testify Thursday to the House Budget Committee on the report.

Maya MacGuineas, president of the Committee for a Responsible Federal Budget, told The Associated Press ahead of the release that the pandemic, war in Ukraine and other factors point to the importance of reducing the annual deficit.

“Unfortunately, the underlying story here is one of fiscally unsustainable positions and on top of that, we have this added challenge of inflation and a reminder that external shocks continue to come at us,” she said. 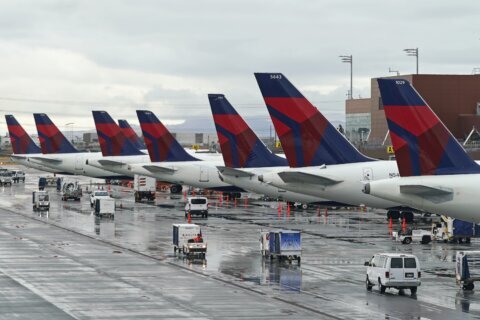