Clear across town, Amazon Prime was back in the game as well, through a dual-program activation entitled “Superheroes & Superstars,” a live interactive experience in support of the March 25 launch of their new series, Lizzo’s Watch Out for the Big Grrrls. And the June 3 third season debut of the network’s original series The Boys.
Listen now to WTOP News WTOP.com | Alexa | Google Home | WTOP App | 103.5 FM
(1/9) 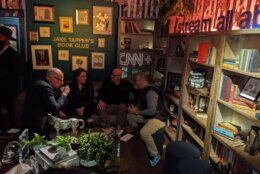 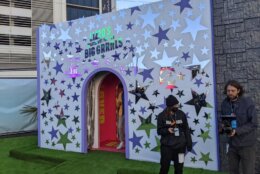 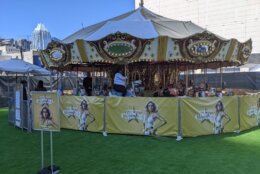 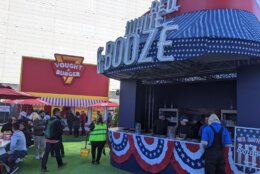 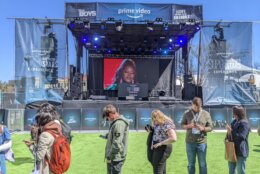 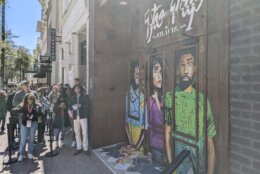 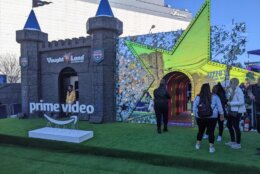 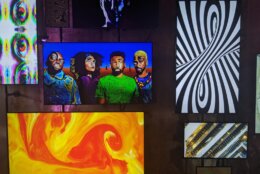 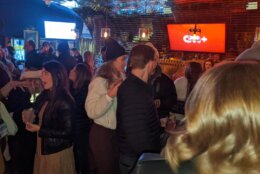 South-By is back! Three years after its last, live, in-person event, South-By-Southwest roared back to life Friday with a full slate of events, panels and activities that gave the impression that COVID — and everything that surrounded it — never existed.

While the traffic along Trinity Street and the largely unmasked crowds traversing the Austin Convention Center hallways appeared slightly diminished from years past, throngs of festival attendees packed the ticket line for the opening night movie premiere of Everything Everywhere All at Once, at the Twitter House on Rainey Street and at the Blockchain Creative Labs House, FOX Entertainment’s NFT studio, on 5th Street.

While South-By-Southwest offers myriad attractions to fans of all things film, music, technology, comedy, cannabis and more, the festival also maintained its tradition of using activations and installations to launch new or upcoming season television programming.

To support the March 24 season three premiere of the FX/Hulu comedy Atlanta, the popular Austin hot spot Higher Ground was transformed into an immersive pop-up entitled “The Trip: an Atlanta Café,” a theme-inspired activation which delivered to attendees glimpses of various scenes to come through exploration of a multi-floor psychedelic experience.

“We created this installation ahead of our season three release which essentially plays up what the whole season is going to be about and what’s going to happen,” said Ariana Lemuss, the show’s brand ambassador. “As season three has a sort of psychedelic trippy vibe to it we, created the Atlanta Café as a way to deliver a similar experience for our attendees.” According to Lemuss, these activations offer an opportunity for devotees to connect, somewhat directly, with show.”

“These activities allow fans to become more immersed and actually feel like they’re there, so they will be more tempted to go and watch the show,” Lemuss continued. “That’s the primary reason why we create these events.”

SXSW will unveil the premiere episode of season three on Friday, with all the main cast members in attendance.

Clear across town, Amazon Prime was back in the game as well, through a dual-program activation entitled “Superheroes & Superstars,” a live interactive experience in support of the March 25 launch of their new series, Lizzo’s Watch Out for the Big Grrrls. And the June 3 third season debut of the network’s original series The Boys.

Created by Prime Video Marketing Events, Live Nation, Catalina Productions, and AgenC out of Los Angeles, the activation, which covers a full city block across the street from the Convention Center, offers several innovative looks at elements associated with both shows through food and drink, interactivity, photo ops and themed giveaways.

Guests enjoy cuisine from Diabolical’s signature Vought A Burger stand, rides on Starlight’s Carousel of Dreams, drinks from Homelanders’s Red, White and Booze Bar and much more while attendees prepped for stardom with glow-ups at the Hair Toss, Check My Nails Glam Station, while enjoying Lizzo-inspired refreshments at the supersized Juicebox bar.

Unquestionably, the installation, takes the form of an unbridled adult-oriented playground.
A totally unscripted eight-episode reality program, Lizzo’s Watch Out for the Big Grrrls promises to be an energetic, inspiring talent search as the superstar singer sets out to find a squad of backup dancers to join her world tour.

A superhero-focused thriller, set in a world where powerful meta-humans run amok under the pretense of serving society, The Boys follows dozens of super powered characters, headed by seven elite protagonists, managed and controlled by a malevolent corporate entity as well as a ragged collection of self-styled commandos whose mission in life is to bring the evil Vought Corporation to its knees. Amazon officially released the program’s season three trailer on Saturday afternoon.

But South-By’s new programming launch mission is not limited solely to sitcoms, reality shows and thrillers.

Cable news giant CNN also took part, using SXSW to formally launch CNN+, the network’s new streaming service which will feature daily versions of weekly CNN shows, all-new programming, original series and movies plus a full library of past CNN content. Set to price at $5.99 per month, or $59.99 annually, CNN+ will feature a dynamic lineup of network personalities, some of whom are familiar to existing viewers while others, like Chris Wallace, are joining the team from other outlets.

CNN formally launched the new service with an exclusive Opening Night Party at the CNN House on Rainey Street, with network stars Kasie Hunt, Poppy Harlow, Rex Chapman and others in attendance.

“South by Southwest has always been a place where innovation, technology and media have all come together, which makes this festival the perfect place for us to launch this product,” said Andrew Morse, Head of CNN+ and the streaming service’s Chief Digital Officer. “The people who attend have a proven interest in the kind of product that we’re creating, so there was really no better place for us to come in and birth CNN+ into the world than South-By-Southwest.”

Throughout the week, CNN personalities will appear on panels and speaker presentations while the CNN House hosts their own original programming.

“We will have Trivia Nights at the CNN House, Audie Cornish will host a tribute session later this week and Scott Galloway will also interview several prominent personalities,” Morse said; all of which will be a foreshadowing of the sort of programming subscribers can expect to enjoy.

Or as they say in the television news and entertainment business … stay tuned!