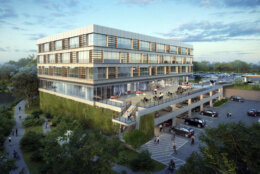 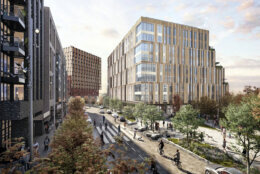 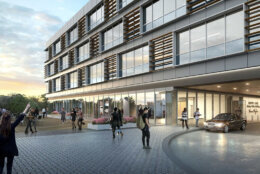 Developer Howard Hughes Corp. has released initial plans for a $325 million investment in the Lakefront District in phases. New development will include a medical facility, housing, retail and more connection to the lakefront’s natural environment.

The first project will be a $45.8 million, 86,000-square-foot South Lake medical office building, adjacent to the Whole Foods Market. It will include a boardwalk-style public terrace, and space for exercise classes and other health and fitness activities.

Orthopaedic Associates of Central Maryland will occupy about 20% of the new building when it opens in early 2024, joining a growing list of health-related businesses in downtown Columbia, including MedStar Health’s headquarters, Healthcare Management Solutions and Welldoc.

Already scheduled to open on the southern end of the Lakefront District this year is Offshore restaurant and an Encore music venue, as well as nonprofit The 3rd, an incubator for women-of-color entrepreneurs.

Howard Hughes’ plans for the north end of the lake include three high-rise residential buildings with 675 apartments or condos, retail and park space, a promenade and a public square. Phase 1 of the Lakefront North development will cost more than $280 million and will be completed over the next several years.

“The Lakefront District will be a compelling example of what a health neighborhood can be, with its beautiful natural setting, promotion of healthy lifestyles through daily engagement, and access to many services and amenities benefiting a revitalized urban core,” said Greg Fitchitt, president of the Columbia region for The Howard Hughes Corp.

The developer says it plans up to two million square feet of overall new development for the Lakefront District.

Columbia’s Merriweather District has grown to a sprawling 5 million-square-feet mix of residential retail and restaurants.

Columbia was one of the first master-planned communities in the U.S. when it was founded by developer James Rouse in 1967. It has grown to 14,000 acres with 10 residential villages. Additional redevelopment plans on the drawing board for downtown Columbia include more than 14 million square feet of residential, office, hotel, retail and public parks.