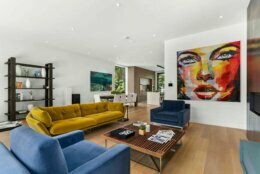 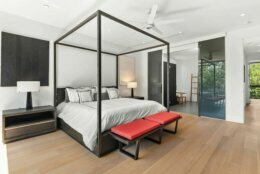 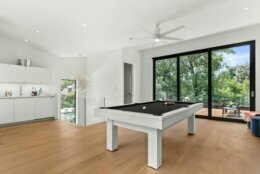 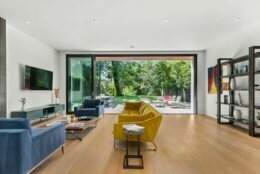 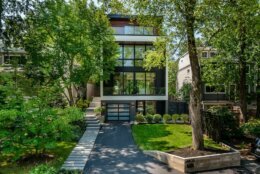 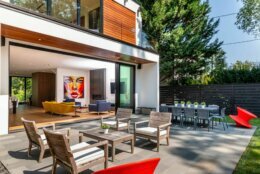 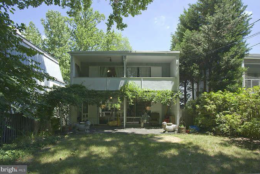 A newly-renovated home in Northwest D.C.’s Palisades neighborhood has hit the market for just under $3.4 million, a property redeveloped by Darryl Pounds, a former NFL pro who played cornerback for the Washington Football Team from 1995 to 1999.

Pounds, who also played for the Denver Broncos in 2000, started his D.C.-based construction and development company, POUNDS, two years after retiring from the NFL.

Pounds is also the owner/seller of the property.

The 1950s-era home at 4805 Bending Lane NW, on a cul-de-sac off Reservoir Road, underwent an 18-month renovation and is now a midcentury modern five-bedroom, 4 1/2-bath house on a lot that backs up to parkland overlooking the Potomac River.

It has been renovated in a Scandinavian style. And counting its outdoor space, accessed by a wall of 10-foot sliding doors, it is almost 5,500 square feet.

In addition to the backyard and patio, it has two roof decks and views overlooking the Potomac. The lower level office has a separate entrance.

It is the second midcentury modern makeover Pounds has done in the neighborhood.

In addition to residential renovations in D.C., Pounds has been contracted for several commercial design and build-out projects, including the visitor center at the Martin Luther King Jr. Memorial on the National Mall.

“I never looked at football as my only career. While playing in Washington, I began investing in real estate and, after retiring, it was the D.C. real estate market that drew me back to Washington from Denver,” Pounds said.

As for the Palisades renovation: “It’s tucked away on a cul-de-sac full of midcentury homes that were built by the architect, Grosvenor Chapman. I knew that I could really indulge in building a midcentury modern home that wouldn’t look out of place as some modern homes in the D.C. area do when they’re surrounded by very traditional homes.” Pounds said.

The Palisades home is listed by Robert Hryniewicki, Adam Rackliffe and Christopher Leary of HRL Partners at Washington Fine Properties.