For as little as $150, you can rent an electric-powered Scandinavian-designed picnic boat, large enough for eight passengers, at The Wharf Marina, and no boating license is required.
Listen now to WTOP News WTOP.com | Alexa | Google Home | WTOP App | 103.5 FM
(1/4) 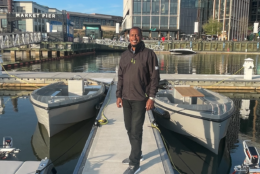 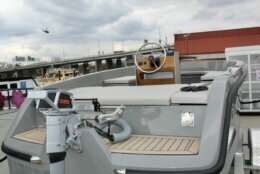 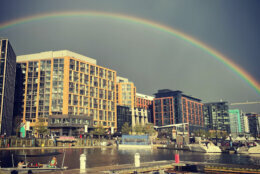 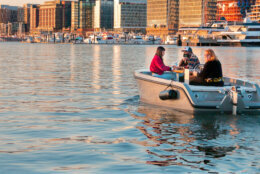 For as little as $150, you can rent an electric-powered Scandinavian-designed picnic boat, large enough for eight passengers, at The Wharf Marina, and no boating license is required.

Float DC launched April 1. Renters are encouraged to get a boat safety certificate, available online, first, though it does offer a same-day crash course in boater safety (with a quiz) and a one-day certificate. Renters do need a valid driver’s license and need to be at least 21 years old.

The Float DC boats are confined to the Washington Channel at The Wharf, and not the open Potomac River. They cruise at a top speed of about 5 mph.

Owner Lavert Phillips, with a career in the wholesale liquor distribution business, got the idea for the electric picnic boats four years ago while on a trip to Sweden and Denmark, where he and friends enjoyed a couple of trips on them.

“I saw this little boat sitting on the water in Malmo and it said, ‘Rent me,’ and it looked like a lot of fun, so I rented it. When friends met with me in Copenhagen, we saw similar boats and I thought that it was something I wanted to do in D.C.,” Phillips said.

He’d originally planned to franchise that company’s business, called Go Boat, in D.C., but ultimately ended up purchasing a dozen of the boats from the manufacturer, with support and guidance from Go Boat’s owner, whose company also has the boats manufactured and sells them.

He received guidance in navigating all the regulations and paperwork to launch Float DC from a friend who owns a similar electric boat rental business in Annapolis, Annapolis Electric Boat Rentals.

“There were a lot of hurdles — DCRA, Harbor Patrol, D.C. police, licensing and insurance. I had a lot of help from a lot of people to get this off the ground,” said Phillips, who grew up around boats and is an avid scuba diver.

With no firm deals for where he would operate his business, his maiden picnic boat voyages were as private charters for the Capital City Long Drive Classic, shuttling players from The Wharf to West Potomac Park in the fall of 2020, thanks to a connection from a friend at Events DC.

Float DC currently has four boats at The Wharf, with more on the way. Phillips is also working on deals to launch boats, perhaps next year, from Navy Yard and National Harbor.

The 18-foot electric boats are designed to be user-friendly and are, obviously, eco-friendly. They are available for one- to three-hour rentals, and include a cooler, Bluetooth audio system, USB outlets, an optional canopy top, life vests for kids and other safety equipment.

And yes, you can BYOB and food. But whoever is piloting the boat must remain sober, and red wine is a no-no. (Red wine spills do not play well with boat deck cleaning.)

Phillips, who is the sole owner and operator of the company, said the boats each cost about $35,000. He has a total of 12 of them, but they’re not all here. Four of them were delayed by the Suez Canal bottleneck in March when a container ship ran aground blocking containership traffic.