Wood you believe it? Timber-topped addition to DC building underway

Heavy timber hasn’t been used in large-scale building construction in the District in a century, but construction is now underway on an addition to an existing office building in Capitol Riverfront using just that.
Listen now to WTOP News WTOP.com | Alexa | Google Home | WTOP App | 103.5 FM
(1/3) 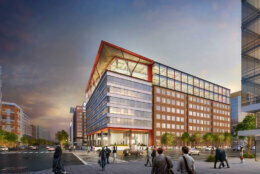 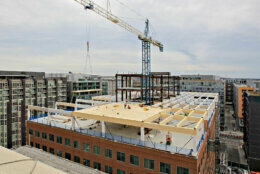 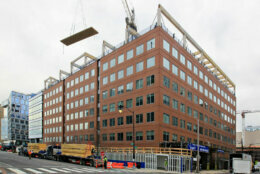 Heavy timber hasn’t been used in large-scale building construction in the District in a century, but construction is now underway on an addition to an existing office building in Capitol Riverfront using just that.

Columbia Property Trust has taken delivery of almost 1,400 tons of mass timber sourced from the Pacific Northwest and Eastern Canada and has hoisted it to the top of the 80 M Street office building in Southeast.

The largest of the giant wood planks measure 32 feet long and weigh more than 6,300 pounds.

D.C.-based architecture firm Hickock Cole, which designed the addition, says mass timber design is a low-carbon alternative to steel, concrete and masonry. Mass timber projects can be constructed faster and with less on-site labor, the firm said. The engineering firm Arup is building the addition.

The 80 M timber addition is expected to be completed in 2022.

The American Trucking Association has signed a 16-year lease for 60,000 square feet at the building — fitting, considering all the mass timber was trucked to D.C. from Washington State and Quebec.