Find out where you can see early inventions as the U.S. Patent and Trademark Office issues its 10-millionth utility patent this week. A scavenger hunt is part of the fun in Alexandria.
Listen now to WTOP News WTOP.com | Alexa | Google Home | WTOP App | 103.5 FM
(1/3) 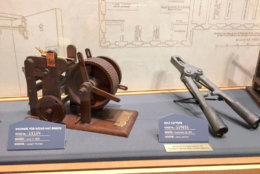 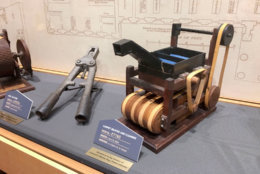 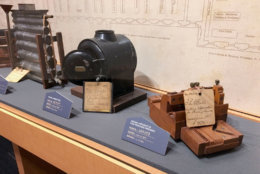 WASHINGTON — The U.S. Patent and Trademark Office will issue its 10-millionth utility patent this week, and Alexandria, Virginia museums are helping mark the occasion with displays of inventions and a scavenger hunt.

A utility patent is issued for something new, or something that improves on an existing item. There also are patents for designs, such as a Coca-Cola bottle design, and patents for plants, for inventors who discover a distinct and new variety of a plant.

The nine museums participating in Utility Patent No. 10,000,000 are displaying models of inventions submitted for patents by early inventors.

“In our headquarters here at PTO we have the National Inventors Hall of Fame Museum, and they have lent patent models to various museums around Alexandria,” Linda Hosler at PTO told WTOP.

“Patent models are items that inventors used to have to send to the Patent Office when they applied for a patent and they are really complicated, and they are supposed to be working models of their invention,” she said.

Alexandria will mark the milestone to acknowledge PTO’s contributions to the city’s community and economy as a major Alexandria-based employer. PTO moved its headquarters to Alexandria from Crystal City, Virginia, in 2005.

The museums are part of a scavenger hunt and, although there are no prizes for finding what’s on the list, it is a fun way to involve families in the patent milestone.

“At each location you can collect a PTO inventor trading card, and these are cards that highlight various important inventors in our history,” Hosler said.

Here’s a list of museums displaying working models of early patent applications and participating in the trading card scavenger hunt.

It runs through Labor Day.

The Patent and Trademark Office was established in 1790. The first patent issued, that same year, was to Samuel Hopkins of Philadelphia for his improvement in “the making of Pot ash and Pearl ash by a new apparatus and process. President George Washington signed the first patent.

US targets $1.3 billion in French imports in tech tax clash