An Uber-style moving service just arrived in D.C. and promises to ease the pain of finding movers. It also will bring up to 120 jobs to the area.
Listen now to WTOP News WTOP.com | Alexa | Google Home | WTOP App | 103.5 FM

WASHINGTON — A moving service modeled after ride-hailing services like Uber has rolled into Washington.

Bellhops uses an app to match customers with its movers and drivers from weeks to hours in advance.

The company hires current and former college students, called Bellhops, to handle the labor portion of the moving, and professional drivers to transport the customers’ belongings.

Bellhops is based in Chattanooga, Tennessee and has outlets in 20 other cities. It’s now hiring for its newly launched Washington service. The service will open with 100 movers and 20 drivers and plans to expand soon as warmer weather normally increases demand for moving services

“By pairing our fun, friendly workforce with our logistical technology, we have designed a platform that makes moving less stressful, more transparent and more on-demand than ever before,” said CEO Luke Marklin.

The downside is customers have to do the packing themselves and be ready when the truck arrives. The upside is it’s fast. Bellhops says it can make a two-bedroom, cross town move in three hours.

The company started on Auburn University’s campus in 2011 as an alternative for students moving into dorms each semester, and is now in Austin, Atlanta, Denver and Nashville. Within two years, the majority of its customers were non-students.

Bellhops has moved more than 100,000 customers so far, and investors like their progress: the company has raised more than $25 million. 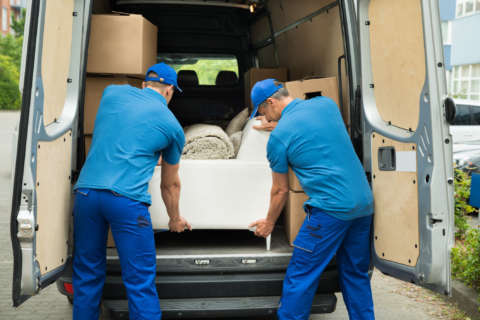