BALTIMORE (AP) — Tyler Bass kicked a 21-yard field goal on the game’s final play, and Josh Allen rallied the Buffalo Bills from a 17-point deficit to beat the Baltimore Ravens 23-20 on Sunday.

With the score tied at 20 in the final quarter, the Ravens (2-2) had second down from the Buffalo 1-yard line. Two straight runs failed to reach the end zone.

On fourth-and-2, Lamar Jackson had to scramble, then threw a pass into the end zone that was intercepted by Jordan Poyer for a touchback with 4:09 remaining.

From there, Allen calmly guided Buffalo (3-1) into field goal range, capping his team’s comeback from a 20-3 deficit late in the second quarter.

J.K. Dobbins scored two early touchdowns for the Ravens, but they allowed a 4-yard touchdown pass from Allen to Isaiah McKenzie in the waning seconds of the first half to make it 20-10.

Buffalo controlled the third quarter and tied it on Allen’s 11-yard touchdown run.

Playing in a packed stadium only four days after Hurricane Ian ravaged portions of Florida, Mahomes had TD throws of 16 yards to Travis Kelce, 1 yard to Edwards-Helaire and 10 yards to Jody Fortson while making NFL history by reaching 20,000 yards passing faster than anyone else.

Edwards-Helaire and tight end Noah Gray rushed for TDs for the Chiefs (3-1), who won the first meeting between Mahomes and Brady since Tampa Bay’s 31-9 rout of Kansas City in the Super Bowl — also played at Raymond James Stadium — two seasons ago.

Brady completed 39 of 52 passes for 385 yards and three TDs without an interception for Tampa Bay (2-2). The Bucs, however, played from behind the whole night after rookie Rachaad White fumbled the opening kickoff and Mahomes threw his TD pass to Kelce two plays later.

Brady threw TD passes of 13 yards and 1 yard to Mike Evans, who returned from serving a one-game suspension for his role in a on-field brawl at New Orleans two weeks ago. He had eight receptions for 103 yards.

Justin Jefferson beat Marshon Lattimore on a 39-yard reception to set up Joseph’s go-ahead kick — after the kicker had missed an extra point earlier in the quarter, leaving the Vikings with a 25-22 lead.

The Saints (1-3) then had an eight-play drive and Lutz made a 60-yard field goal with 1:51 left to tie the game. But Lutz’s next attempt was just a little bit off as New Orleans dropped its third straight.

Jefferson had 10 receptions for 147 yards and ran for a touchdown late in the fourth quarter for the Vikings (3-1).

Minnesota squandered multiple scoring chances, settling for field goals — Joseph was 5 for 5 — but still held off a New Orleans team that played without quarterback Jameis Winston and running back Alvin Kamara.

Kirk Cousins completed 25 of 38 passes for 273 yards with a touchdown and an interception. The Vikings under first-year coach Kevin O’Connell are off to their best start since going 4-0 in 2016.

Rookie quarterback Bailey Zappe made his debut for New England, playing the majority of the game after Brian Hoyer left with a head injury.

Zappe and the Patriots (1-3) played well enough to force overtime, but Aaron Rodgers bounced back from a dreadful first half.

Each team went three-and-out on its first overtime possession. The Packers (3-1) then marched 77 yards in a 12-play drive that lasted nearly seven minutes before Crosby made his winning kick.

Green Bay had tied the game at 24 on Rodgers’ 13-yard touchdown pass to rookie Romeo Doubs with 6:14 remaining.

The Jets (2-2) won at Pittsburgh for the second time in franchise history. Zach Wilson, making his season debut, led New York down the field late after the second of Pickett’s three interceptions with 3:42 to go.

Wilson took the Jets 65 yards in 10 plays, the last when Hall churned across the goal line.

Wilson finished 18 of 36 for 252 yards with a touchdown and two interceptions. He also became the first quarterback in Jets history to catch a touchdown when he hauled in a 2-yard pass from Braxton Berrios in the second quarter.

The Jets were up 10-6 at the half when the Steelers inserted Pickett, who became the first QB in NFL history to run for a pair of touchdowns in his debut. The second was a 2-yard scramble that gave the Steelers (1-3) a 20-10 lead with 13:41 remaining.

Wilson responded with a 5-yard touchdown pass to Corey Davis that drew the Jets within 20-17 with 7:35 to go.

Pickett drove the Steelers into New York territory, but his throw to Pat Freiermuth was high and late and was picked off by a diving Michael Carter II.

Pickett finished 10 of 13 for 120 yards. His last interception was a Hail Mary attempt on the final play.

EAST RUTHERFORD, N.J. (AP) — Daniel Jones ran for two touchdowns before injuring an ankle, and Saquon Barkley had 146 yards rushing and ran the wildcat offense at times after both New York quarterbacks were hurt in a win over Chicago.

Jones scored on runs of 21 and 8 yards, New York rushed for 262 yards and Graham Gano kicked field goals of 44 and 43 yards as the Giants improved to 3-1 under rookie coach Brian Daboll. It’s their best start since 2011, when they won the Super Bowl.

Michael Badgley kicked four field goals for the Bears (2-2) while filling in for Cairo Santos, who missed the game for personal reasons.

Jones and backup Tyrod Taylor were injured a roughly 10-minute span in the second half. Jones (8 of 13 for 71 yards and 68 yards rushing) injured an ankle when he was sacked by Jaquan Brisker late the third quarter. Taylor went into the concussion protocol after scrambling for a first down with 8:35 to go.

Jones finished the series that Gano ended with a 44-yarder for a 17-12 lead and Barkley ran the direct-snap offense that Gano finished with his 43 yarder with 5:34 to go.

DETROIT (AP) — Geno Smith threw for two touchdowns and ran for a score in the first half, and Seattle held off Detroit.

Smith finished 23 of 30 for 320 yards, including a 17-yard touchdown pass to Will Dissly and a 2-yard pass to Noah Fant. The veteran quarterback ran seven times for 49 yards, including an 8-yard score on his second drive.

The Seahawks (2-2) were stopped on a third down late in the third quarter, but the Ford Field play clock wasn’t set properly. Seattle took advantage of the second chance as Rashaad Penny ran 36 yards for a touchdown on third-and-16, opening a 38-23 lead.

T.J. Hockenson had eight receptions and set career highs with 179 yards receiving and two touchdowns, the second of which helped the Lions (1-3) pull within three with 5:26 remaining.

Smith’s favorite target was DK Metcalf, who had seven catches for 149 yards.

Goff was 26 of 39 for 378 yards with four touchdowns and an interception that Tariq Woolen returned 40 yards for a TD. Jamaal Williams ran 19 times for 108 yards and two scores.

Trevor Lawrence threw for 174 yards and two touchdowns to Jamal Agnew. Lawrence was strip-sacked on the final drive of the game, sealing the win for the Eagles. It was one of four lost fumbles for the second-year quarterback.

The Eagles (4-0) shook off an abysmal start — Hurts had a pass intercepted by Andre Cisco and returned 59 yards for a TD. Lawrence hit Agnew from 4 yards out to give the Jaguars (2-2) a 14-0 first-quarter lead.

Hurts then ran virtually untouched up the middle, took a crushing hit at the goal line and powered through for a 20-yard touchdown. It was his fourth rushing TD of the season. Sanders tied it on a 10-yard TD run.

A fumble by Lawrence late in the second quarter set up Kenneth Gainwell’s 10-yard rushing TD that put the Eagles ahead for good.

Rush also had a TD toss to new No. 1 receiver CeeDee Lamb while improving to 4-0 in his career as a starter.

He’s led the Cowboys (3-1) to three straight wins since Prescott fractured the thumb on his throwing hand in the season-opening loss to Tampa Bay.

The Commanders (1-3) lost their third straight. Washington had several promising drives stalled by penalties, and flags also wiped out interceptions by Benjamin St.-Juste and Kamren Curl.

Dallas’ defense has held its first four opponents to 19 or fewer points for the first time since 1973.

Washington’s Carson Wentz was flagged for intentional grounding twice a week after being sacked nine times. He threw two interceptions, the second all but clinching the Dallas victory in the fourth quarter.

Houston scored 17 straight points to get within three with about 8 1/2 minutes left. The Chargers (2-2) then put together a 12-play, 84-yard drive, capped by Ekeler’s 14-yard reception, to put the game away and snap a two-game skid.

Ekeler scored on runs of 10 and 20 yards in the second quarter as Los Angeles raced out to a 21-0 lead.

The banged-up Chargers looked great early, scoring on five of their first six possessions to build a 27-7 lead by halftime despite Herbert still dealing with a rib injury and the team playing without star defender Joey Bosa, who had groin surgery, and top receiver Keenan Allen.

Davis Mills threw for 246 yards with two touchdowns and two interceptions, getting going after halftime after a slow first half. A bright spot for the Texans (0-3-1) was the continued strong play of rookie Dameon Pierce, who had 131 yards rushing, highlighted by a 75-yard scoring run in the second quarter.

The Falcons (2-2) spoiled the Georgia homecoming of Cleveland’s Nick Chubb, who ran for 118 yards and a touchdown with his high school team watching.

Younghoe Koo’s 45-yard field goal, his third of the game, with 2:28 remaining gave the Falcons the lead.

The Browns (2-2) moved past the 50 but on third and 23, Alford picked off Brissett’s pass intended for David Bell.

The Falcons leaned on a balanced running attack led by rookie Tyer Algeier, who had 10 carries for 84 yards. Caleb Huntley and Cordarrelle Patterson each ran for touchdowns.

Atlanta’s Marcus Mariota passed for only 139 yards with an interception.

INDIANAPOLIS (AP) — Derrick Henry rushed for a season-high 114 yards and a touchdown and Tennessee’s defense held up late to beat Indianapolis.

Tennessee (2-2) has won a franchise-record four straight in the series and improved to 11-2 against AFC South opponents since 2020. The Titans scored no second-half points for the second consecutive week. Henry topped 100 yards in the first half as Tennessee took a 24-3 lead.

Indy (1-2-1) has one win in its past six games and blew late three scoring chances.

Matt Ryan threw two second-half touchdown passes to Mo Alie-Cox. But a sack knocked Indianapolis out of field-goal range on the final play of the third quarter, Jonathan Taylor lost a fumble on the Colts’ next series and Chase McLaughlin missed a 51-yard field goal with 1:58 to play.

CHARLOTTE, N.C. (AP) — Kyler Murray threw for 207 yards and two touchdowns and added one rushing as Arizona overcame another lackluster first half to beat Carolina.

Murray threw TD passes of 23 yards to Marquise Brown and 2 yards to Zach Ertz and also ran for a 4-yard score. The Cardinals (2-2) held a 17-minute advantage in time of possession.

Three-time NFL Defensive Player of the Year J.J. Watt, playing just four days after having his heart shocked into rhythm after going into atrial fibrillation, then deflected a pass by Mayfield that Dennis Gardeck intercepted and returned to the Carolina 5.

Two plays later, Murray scored on a designed rollout for a 20-10 lead. Murray found Brown on a corner route to push the lead to 26-10.

After opening their first season under coach Josh McDaniels by losing three straight one-score games, the Raiders (1-3) did enough on the ground with their biggest rushing game in six years and on defense to hold off Russell Wilson and the Broncos (2-2).

After getting a 5-yard TD pass from Wilson to Courtland Sutton to cap a 34-yard drive in the first quarter, the Broncos turned three other chances with prime field position into one field goal and the fumble by Melvin Gordon III that Robertson returned for the touchdown. 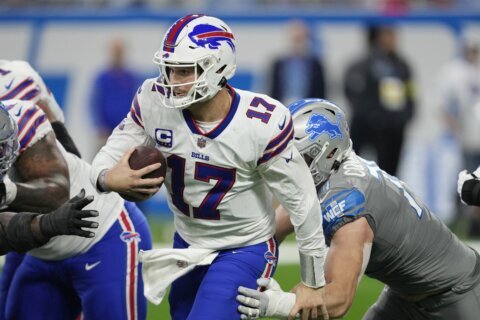 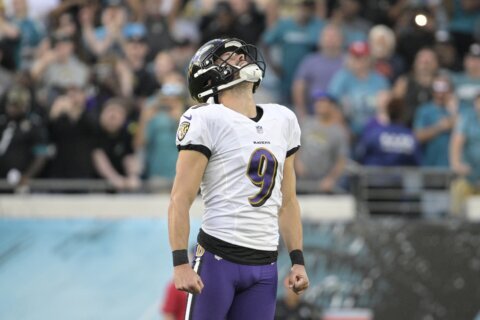 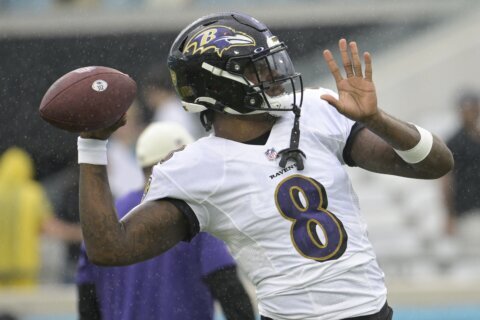