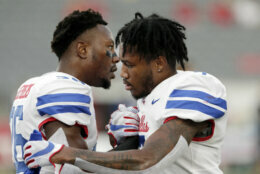 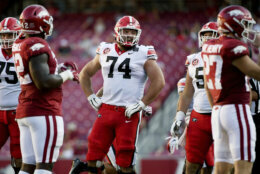 So far, the strategy seems to have worked well for them.

Baltimore was able to address two more areas of need on Day 2 of the draft.

The Ravens added Georgia guard Ben Cleveland with the 94th overall pick and then selected SMU cornerback Brandon Stephens at No, 104.

“It was a long day but we’re very happy with the outcome,” Baltimore general manager Eric DeCosta said. “We got two players that really check a lot of boxes for us and definitely fill some important needs. Two players that we had targeted today.”

Stephens was a former running back at UCLA before transferring to SMU in 2019. Last season, he started all 10 games for SMU, finishing with 43 tackles (36 solo), including one for loss. He also led the conference with 10 pass breakups and had one interception, one fumble recovery and a quarterback hit.

“They’re great at what they do,” Stephens said. “I have a ton to learn … just to better my game. I can’t wait to get into that room with them and help the organization win games.”

DeCosta expects Stephens to make an impact on special teams and also play some safety.

“A lot of upside potential. The kind of player that we look for,” DeCosta said.

The Ravens received the 104th selection as a compensatory pick for former assistant David Culley, who was hired as the head coach of the Houston Texans earlier this offseason.

Under the NFL’s new minority hiring resolution, a team that loses a minority coach or executive to another franchise as its head coach or general manager receives two third-round compensatory picks, one in 2021 and another in 2022.

Cleveland, 6-foot-6 and 343 pounds, was nicknamed “Big Country” during his college career at Georgia. Baltimore acquired the 94th pick as part of the trade with the Kansas City Chiefs for offensive tackle Orlando Brown Jr. last week.

Cleveland is looking forward to the opportunity to block for Ravens quarterback Lamar Jackson, who was the NFL MVP two seasons ago.

“It’s a dream come true,” Cleveland said. “This is everybody’s dream as a kid growing up who plays football. There’s no place I’d rather be. I fell in love with the coaching staff. I think it’s going to be a great fit for me.”

The Ravens also had a pair of first-round selections, adding wide receiver Rashod Bateman with the 27th overall pick and linebacker Odafe Oweh at No, 31.