Mozeliak addressed the media Saturday morning at Busch Stadium during the Cardinals Winter Up weekend. He said he found out that Holliday was going to step down Jan. 7.

“I’ve known Matt a long time and have the utmost respect for him,” Mozeliak said. “When you find out someone is stepping down from your coaching staff in the second week of January, candidly, it’s not ideal. But, I came in my office last Sunday, and for lack of a modern phrase, I looked at my rolodex to try and figure out what could we do.”

Mozeliak explained he explored internal moves and promotions to the position and examined what the domino effect of that would be on the organization. He also looked at what outside options he had to fill the role.

Mozeliak ended up choosing McEwing to come in for the job. Holliday, a member of the Cardinals Hall of Fame, was announced as the team’s new bench coach Nov. 6. Now, manager Oliver Marmol’s new bench coach is McEwing, a former Cardinal player.

“Beggars can’t be choosers but I can tell you as far as coming out on the positive side of this, I think we did,” Mozeliak said.

McEwing, 50, spent 16 seasons in the Chicago White Sox organization. He worked his way up from minor league coach to big league third base coach (2012-16, 2021-22) and bench coach (2017-20). McEwing was let go after the White Sox named Pedro Grifol their new manager in November.

In nine seasons in the majors as a player, McEwing hit .251 with 25 home runs for the Cardinals, Mets, Royals and Astros.

McEwing also was one of five candidates to receive interviews for the Cardinals’ managerial position following Tony LaRussa’s retirement in 2011. That job went to Mike Matheny.

“We’re very fortunate to end up where we did,” Mozeliak said. “Joe McEwing is someone with experience. He has history with the St. Louis Cardinals. Anybody who knows him or been around him, he really does exemplify everything the Cardinals stand for. We’re really thrilled that we could end up with Joe given the short notice and the fact that look, in 3 1/2 weeks we’re down in Jupiter.”

The departure of Holliday was the fifth change to the St. Louis league staff this offseason. Bench coach Skip Schumaker left to become the manager of the Miami Marlins. Mike Maddux decided to leave and he has been hired as the pitching coach with the Texas Rangers. Hitting coach Jeff Albert departed and now has a coordinator role with the New York Mets. Bryan Eversgerd was reassigned in the organization as a special assistant.

Holliday, 42, last played in the majors in 2018 and then retired. He had no previous coaching or managerial experience at the pro level before rejoining the Cardinals this offseason. He had served as an outfield and hitting coach for Oklahoma State, where his brother Josh is the head coach, from 2019-22.

Holliday has four children, three of them high school age or younger. The oldest son, Jackson, was the first overall pick in the 2022 MLB draft and signed this past summer with the Baltimore Orioles. The second oldest son, Ethan, is rated as one of the top high school players in the country and he has committed to Oklahoma State.

The Cardinals won the NL Central with a 93-69 record in 2022. They were swept in the best-of-three Wild Card Series by the eventual National League pennant-winning Philadelphia Phillies. 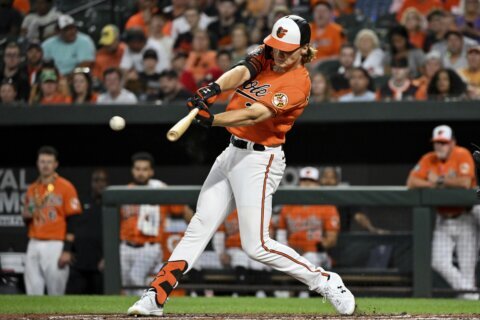