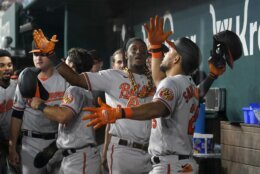 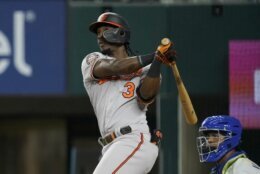 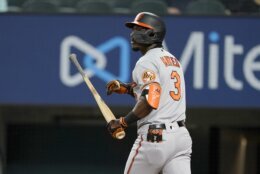 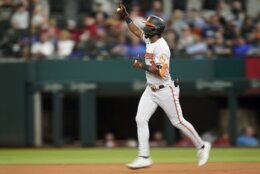 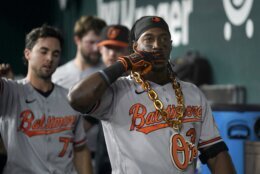 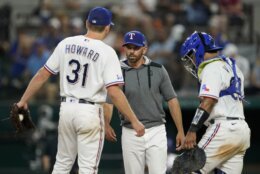 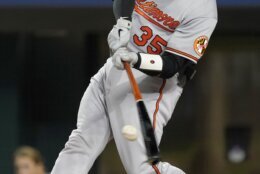 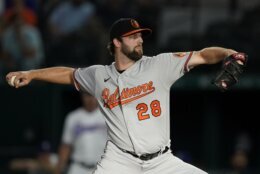 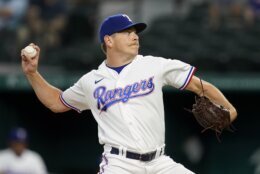 Batting at the bottom of the lineup, Mateo set his single-game highs for home runs and RBIs. He has 10 homers and 32 RBIs this season.

“It feels really good,” Mateo said through a translator. “Got to come back tomorrow and try to do it all over again.”

Texas starter Spencer Howard (2-3) retired the first six Baltimore batters. But he hit Ramon Urias with a pitch leading off the third inning and walked rookie Terrin Vavra before giving up Mateo’s first homer on an 0-2 count.

Adley Rutschman singled home a fourth run, and the lead grew to 5-0 on a sacrifice fly by Ryan Mountcastle.

Winning pitcher Jordan Lyles (8-8) allowed one run and scattered seven hits over 6 1/3 innings against his former team. After Lyles’ two seasons with Texas, the Orioles signed him last November as a free agent.

“He’s been the one guy all year long that has just been an anchor in our rotation,” manager Brandon Hyde said. “He’s been huge for us, and that’s why we kept him.”

Lyles had been considered a candidate to be traded to a contender. Baltimore parted with first baseman Trey Mancini and closer Jorge Lopez in the final two days before Tuesday’s deadline.

But who says the Orioles aren’t contenders themselves? They are 53-51 and 1 1/2 games out of a wild-card spot after winning 51 games last season.

“We’ve got a good team still,” Lyles said. “We showcased that the last two nights. We responded well; we won two games since Trey has left.”

“It’s difficult to see two of our guys go, but we understand it’s a business. Right now, we feel like a family. This group is super united,” he said.

Lyles lost his shutout bid in the fifth when Marcus Semien’s two-out single scored Meibrys Viloria from second base.

Viloria scored both Texas runs. He hit his second homer this season leading off the ninth against left-hander Nick Vespi.

Viloria also doubled in the second and singled in the fifth against Lyles.

Dillon Tate relieved with two runners on in the seventh and kept the Rangers from scoring.

Howard exited after allowing back-to-back doubles to Rutschman and Anthony Santander to open the fifth.

Baltimore rookie right-hander Felix Bautista has three saves and might be the leading contender to replace Lopez as closer. Bautista entered in the ninth with two on and struck out Leody Taveras to end the game.

“It was difficult to see Jorge Lopez go,” Hyde said. “He’s the reason why we won a lot of games. … It’s going to be challenging going forward — the teams in our division, the good teams we play. I don’t think our guys are going to back down.”

“We’ll see how things go a little bit,” he said. “Bautista, Cionel Perez, maybe Tate. It takes a special person to get the toughest three outs of the game.”

Bautista said through a translator: “If the opportunity comes along for me to be the closer, that would be a dream come true.”

Rangers: INF/OF Brad Miller (neck strain) played third base for Double-A Frisco and went 0 for 4. He started a double play and committed a throwing error. Miller had played one prior rehab game with Triple-A Round Rock on Saturday. … OF Adolis Garcia was not in the starting lineup, but manager Chris Woodward said he was merely resting Garcia, who had played 98 of the first 102 games this season. He pinch-hit for Kole Calhoun in the eighth inning and struck out. 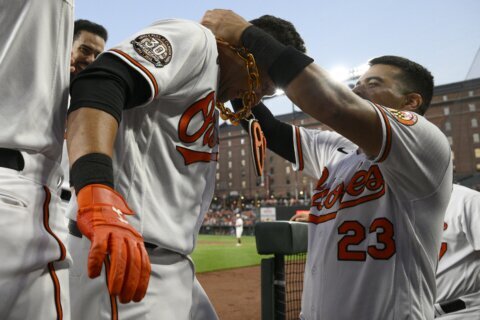