Devin Williams escaped the eighth inning after loading the bases with nobody out, and Josh Hader worked around a leadoff double in the ninth as the Brewers held off the Baltimore Orioles 5-4 on Tuesday night.
Listen now to WTOP News WTOP.com | Alexa | Google Home | WTOP App | 103.5 FM
(1/3) 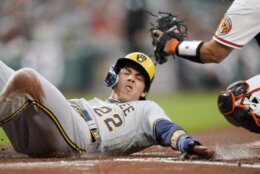 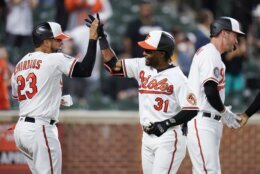 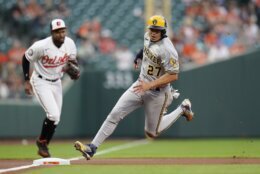 BALTIMORE (AP) — Milwaukee manager Craig Counsell has confidence in Devin Williams and Josh Hader — even when the two bullpen standouts pitch their way into trouble.

Williams escaped the eighth inning after loading the bases with nobody out, and Hader worked around a leadoff double in the ninth as the Brewers held off the Baltimore Orioles 5-4 on Tuesday night.

“That’s what makes them so great,” Counsell said. “In Devin’s case, I thought he was a little out of sorts to start the inning. I thought (pitching coach) Chris Hook, the mound visit was really important there, and Devin got on track and was lights out.”

Andrew McCutchen had three RBIs — including a tiebreaking single in the seventh — and Willy Adames scored three runs for the Brewers.

After being shut out in two of their first four games, the Brewers improved at the plate. But then Williams nearly gave the game away by allowing a single and two walks to load the bases with nobody out in the eighth.

The right-hander recovered, however, striking out Chris Owings, Jorge Mateo and pinch-hitter Ryan McKenna to end the inning and keep Milwaukee ahead by a run.

Hader had his own problems in the ninth, allowing a leadoff double by Mullins before eventually retiring Ramón Urías on a flyball with two on for his second save.

“We had some opportunities off some really good pitching,” Orioles manager Brandon Hyde said. “We did a good job creating opportunities. We’re just not cashing in.”

Félix Bautista (0-1) allowed a one-out double by Adames in the seventh. Cionel Pérez retired Christian Yelich on a grounder before McCutchen’s sharp single put Milwaukee ahead.

Eric Lauer allowed the second-inning grand slam by Mullins, but retired eight of his last nine batters after that. He yielded three earned runs and three hits in 4 1/3 innings.

Spenser Watkins allowed four runs in three innings for Baltimore. Only one of those runs was earned, but that didn’t absolve him of responsibility for the others.

In the first, Watkins had Adames caught trying to steal second before the pitch, but his throw was a bit behind Owings, the shortstop, and Owings got an error for dropping it.

McCutchen’s two-run double made it 2-0.

After Mullins’ grand slam, the Brewers quickly tied the game in the third. Watkins made a poor throw to first after fielding a grounder by Rowdy Tellez. That should have been the third out, but instead Adames hustled all the way home from second on the error by the pitcher.

A wild pitch sent Tellez to second, and he scored on Hunter Renfroe’s double to tie it at 4.

“They made some mistakes defensively, and that helped us out,” Counsell said. “We got some big two-out hits tonight, finally, which we’ve been lacking.

Lauer was the first pitcher to benefit from the decision to push back the wall in left field at Camden Yards and make it taller. Trey Mancini’s deep fly to left in the third bounced off it for a double instead of sailing into the seats for a home run.

“Definitely helped me out on that one hit,” Lauer said. “Knowing what it used to be and what it is now, especially with how big they made the wall, I bet you that’s pretty demoralizing for righties.”

Milner’s win was his first big league decision — in his 96th game. That’s a major league record to start a career.

Milner began his major league career with Philadelphia in 2017.

Brewers: Counsell said INF Luis Urías (left quad) is expected to progress to taking at-bats in Arizona around the end of this week.