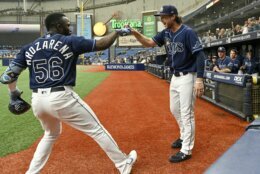 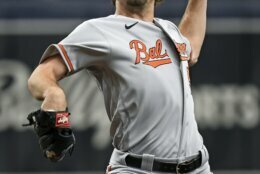 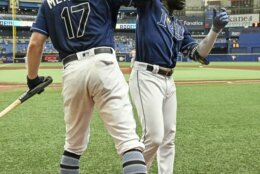 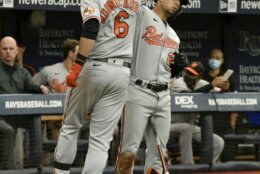 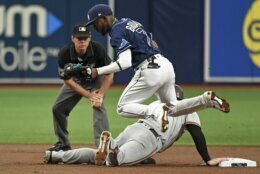 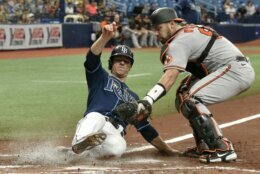 Randy Arozarena hit two home runs and also had a key single as the Rays won for the 10th time in 13 games. He stopped a 21-game home run drought in Tuesday night’s 9-3 win over Baltimore.

Tampa Bay trailed when Francisco Mejía led off the ninth with a single against Tanner Scott (3-4) and pinch-hitter Mike Zunino drew a one-out walk.

Arozarena then hit a flare to right field, with first baseman Ryan Mountcastle and second baseman Pat Valaika colliding in pursuit, for a single that loaded the bases.

After Vidal Bruján struck out, Meadows lined an 0-2 pitch to center.

Alexander Wells allowed three runs and five hits over 5 2/3 innings while filling in for scheduled Baltimore starter Keegan Akin, who was placed on the COVID-19 injured list.

Wells, making his first career start and third appearance overall, struck out seven and walked two during a 93-pitch outing. The left-hander became the 13th Australian-born player and third with the Orioles to make a big league start.

In addition to Akin, outfielder Anthony Santander also was put on the COVID-19 IL.

Mountcastle hit a solo homer in the fourth. He put Baltimore ahead 4-3 with a sixth-inning RBI single off Matt Wisler.

Valaika had a solo home run, his second of the year and first since May 5, to tie it at 2 in the third.

Baltimore’s Austin Hays had a first-inning RBI double before Arozarena connected for a leadoff homer in the bottom of the inning.

Arozarena’s second solo homer in the fifth pulled the Rays even at 3.

The other Australian-born pitchers to start with Baltimore were RHP John Stephens and LHP Damian Moss.

Orioles: C Austin Wynns had his mask knocked off on the follow through of Arozarena’s swing in the seventh. He stayed in the game.

Rays: Zunino (left hip flexor tightness) was out of the starting lineup for the second straight game… OF Manuel Margot (left hamstring strain) will start a rehab assignment in the next couple days with Triple-A Durham. … RHP J.P. Feyereisen (right shoulder discomfort) went on the 10-day IL and RHP Chris Mazza was recalled from Triple-A Durham.

Rays: RHP Luis Patiño (1-2) was put on the taxi squad from Triple-A Durham and will face Cleveland on Thursday night.

“We want him to start,” Tampa Bay manager Kevin Cash said of the 21-year old Patiño. “He’s done good things in Triple-A. A young pitcher that we’ve got to find a way to give him a little bit of a lane, create a path for him to take off here for us and hopefully tomorrow is the start of that.”

RHP Cal Quantrill (2-2) is starting for the Indians. 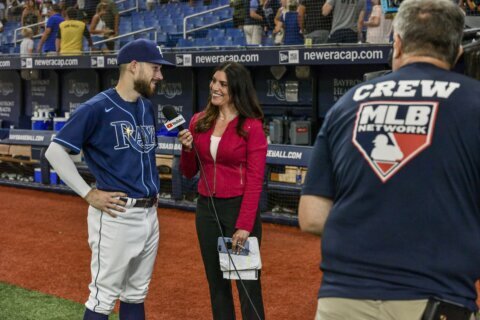