AUSTRALIAN OPEN 2023: Djokovic back in Melbourne; no Barty

MELBOURNE, Australia (AP) — A glance at the Australian Open, the first Grand Slam tennis tournament of 2023:

Iga Swiatek is seeded No. 1 in the women’s bracket, her first time in that spot at the Australian Open, where she reached the semifinals a year ago. Defending champion Rafael Nadal is the No. 1 seed in the men’s draw, moving up a spot because top-ranked Carlos Alcaraz withdrew from the tournament with a leg injury. Novak Djokovic is seeded No. 4 as he makes his return to Melbourne.

Barty became the first Australian in 44 years to win a singles trophy at the nation’s Grand Slam tournament by beating Danielle Collins 6-3, 7-6 (2) in the final. That gave Barty the third major title of her career — after the French Open in 2019 and Wimbledon in 2021 — and extended her stay at No. 1 in the WTA rankings. Less than two months later, she announced her retirement from tennis at age 25. Nadal earned his 21st Grand Slam trophy via an epic comeback, turning things around to beat Daniil Medvedev 2-6, 6-7 (5), 6-4, 6-4, 7-5. It was the first time in 57 years that a man won an Australian Open final after dropping the first two sets. Before the tournament began, all eyes were on Djokovic, who flew to Australia despite being unvaccinated against COVID-19, then had his visa revoked, was deported and couldn’t participate in a tournament he has won nine times.

This is the first Grand Slam tournament since Serena Williams and Roger Federer — owners of a combined 43 major singles championships — announced last year they were ending their playing careers. Also now retired: Barty. Other key players who are not in the field include Alcaraz, Venus Williams (injured), Naomi Osaka (out of action since September) and Simona Halep (serving a provisional doping ban). Osaka announced Wednesday on social media that she is pregnant and will be taking the year off.

22 — Grand Slam singles titles for Nadal, a record for men — one more than Djokovic, two more than Federer — and one away from the overall Open era mark held by Williams. 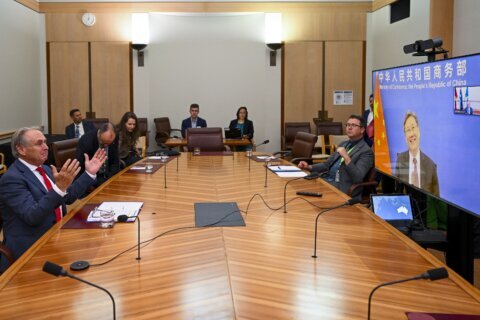