China’s Foreign Ministry said the visit will take place on Tuesday and Wednesday and will include a new round of long-suspended China-Australia talks on foreign and strategic issues.

The trip signals a continued thaw in relations between the two nations since Australian Prime Minister Anthony Albanese won an election victory in May, replacing the more conservative Scott Morrison in the top role.

Trade will be on the agenda for Wong’s meeting with Wang, as Australia continues its push for China to remove billions of dollars in sanctions which have been in place since 2020.

“China has grown to become one of the world’s largest economies and Australia’s largest trading partner,” Albanese and Wong said in a joint statement. “Trade between Australia and China, as well as strong people-to-people, cultural and business links have delivered significant benefits to both our countries.”

Albanese and Wong said the trip came after the Chinese government invited Wong to meet with Wang and hold the sixth Australia-China Foreign and Strategic Dialogue, which was last held in 2018.

“Australia seeks a stable relationship with China; we will cooperate where we can, disagree where we must and engage in the national interest,” Albanese and Wong said in their statement.

The visit comes after Wong and Wang earlier this year engaged in a tit-for-tat diplomatic rivalry in the Pacific as they island hopped on diplomatic visits following a failed bid by China to ink an ambitious multilateral deal with 10 South Pacific nations.

China hopes the two countries will “push bilateral relations back to the right track and achieve sustainable development,” Mao said at a daily briefing.

Relations between the nations have been poor for years after China imposed trade barriers and refused high-level exchanges in response to Australia’s enactment of rules targeting foreign interference in its domestic politics.

Australia and others have also sought to block Chinese inroads into the South Pacific, including Beijing’s signing of a security agreement with the Solomon Islands that could result in China’s stationing of troops and ships in the archipelago, which is less than 2,000 kilometers (1,200 miles) from Australia’s coast.

In June, Australia said a Chinese fighter jet carried out dangerous maneuvers threatening the safety of one of its maritime surveillance planes over the South China Sea. China has also targeted Australian forces with lasers and sent surveillance ships to eavesdrop off the Australian coast as it seeks to assert its military influence in the Indo-Pacific region. 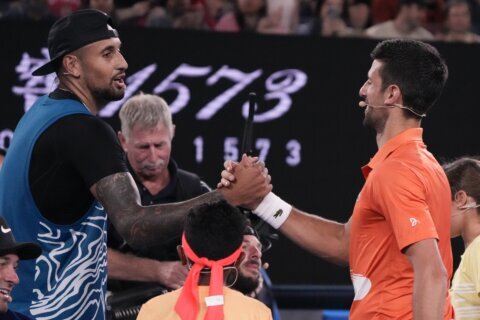