CANBERRA, Australia (AP) — Australian Prime Minister Anthony Albanese joked Thursday that his own birth was somewhat delayed by Queen Elizabeth II because his pregnant mother had insisted on driving past a tribute to the British monarch on her way to the hospital.

Albanese made the comments before lighting a beacon in the capital, Canberra, to mark the queen’s seven decades on the throne. Beacon lighting is a traditional element of British royal celebrations that began as a way for people far from London to take part in festivities.

Elizabeth’s Platinum Jubilee is being celebrated in Britain and throughout the Commonwealth over several days.

Albanese said his country’s relationship with the queen had changed over time.

“Australians hold Queen Elizabeth in respect and affection, even as the bond between our nations is no longer what it was at the dawn of her reign,” he said. “It’s no longer parent and young upstart. We stand as equals. More importantly, we stand as friends.”

The British monarch remains Australia’s official head of state, although these days the role is considered primarily ceremonial.

“In her seven remarkable decades on the throne, the queen has been a rare constant,” Albanese said. “An enduring, inspiring, growing presence of calm, decency and strength.”

As well as lighting beacons, Australia marked the jubilee by illuminating landmarks in royal purple.

During her reign, the 96-year-old monarch has visited Australia 16 times.

She became the first reigning monarch to visit in 1954. In 1973, she opened the Sydney Opera House, and four years later returned for a trip that coincided with her Silver Jubilee celebrations. She most recently visited in in 2011. 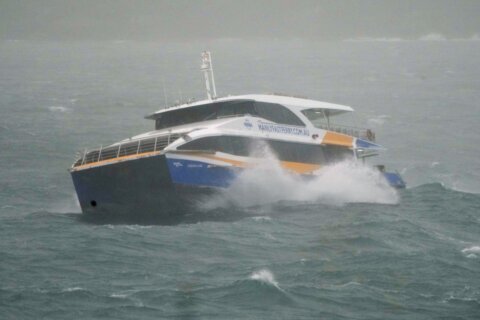