Ahead of his match against Rafael Nadal at the Australian Open, Cameron Norrie hit what sounded like all of the…
Listen now to WTOP News WTOP.com | Alexa | Google Home | WTOP App | 103.5 FM

Ahead of his match against Rafael Nadal at the Australian Open, Cameron Norrie hit what sounded like all of the right notes, the sorts of sentiments that express a healthy blend of respect and confidence.

It is a tricky balance when someone of Norrie’s ilk — ranked 69th and, until this week, the owner of a grand total of six wins in Grand Slam matches — goes up against someone of Nadal’s stature on one of their sport’s biggest stages. Facing a great — any member of the Big Three, say, or Serena Williams — at a major tournament offers plenty of opportunity, of course: a moment in the spotlight; an encounter with an idol; a way to measure yourself against the best; a chance for a career-altering result.

Or, more than likely, a lopsided loss. And to some, that’s OK.

Norrie, a 25-year-old left-hander who went to Texas Christian University and represents Britain, spoke before taking on Nadal at Rod Laver Arena about the prospect of “an unbelievable experience.” About needing “to go after it and enjoy every minute” of Saturday’s third-round encounter.

He acknowledged Nadal is “a legend” in one breath, and in the next called the 2009 champion at Melbourne Park “just another player ” and vowed to “show him what I’ve got.” In the end, to no one’s surprise, it was Nadal who showed what HE’S got, winning 7-5, 6-2, 7-5 to move a step closer to his men’s-record 21st Grand Slam title while preventing Norrie from getting anywhere near his first.

“Always going to be nice,” Norrie said afterward, “to play a big dog like Rafa.”

The scoreline was slightly tighter than Nadal’s previous win: 6-1, 6-4, 6-2 against Michael Mmoh, a 23-year-old from Florida ranked 177th. Mmoh called Nadal “somebody I’ve been watching for years and years — since I was, like, a little baby, almost.”

That type of match is “definitely what we dream of,” Mmoh said. “I couldn’t be happier.”

Casper Ruud, a 22-year-old from Norway who reached the round of 16 at a major for the first time Saturday, recalled making his third-round debut against Roger Federer at the 2019 French Open.

“That’s a tough third-round opponent, the greatest of them all,” Ruud said. “So then you kind of think more about just the experience — being in the third round — than maybe thinking about actually winning the match.”

Players say each such outing against that caliber of foe makes the next one less daunting. There is a difference between going into a match figuring there’s zero shot at a victory and having some semblance of self-belief.

Anastasia Potapova, a Russian teenager who won a Wimbledon junior title in 2016, lost to Williams 6-0, 6-3 a year ago in the Australian Open’s first round. The rematch came Friday in the third round, and Potapova made things far more interesting, even twice coming within a point of taking the first set in what became a 7-6 (5), 6-2 defeat.

When the draws come out at a major, some players study them. Most, it seems, try to avoid knowing any more than the name of their next foe.

Blame superstition, perhaps. Or a desire to, as the cliché has it, focus on one match at a time.

Inevitably, though, if an early meeting with a superstar is in the offing, it’s hard to ignore.

Nina Stojanovic, a 24-year-old from Serbia ranked 99th, arrived in Melbourne never having won a Slam match. So there was no way she was going to look past the first round.

“Then my coach asked me: ‘If you win, you know who you’re playing in the second round?’ And I said, ‘Who?’ And he said, ‘Serena.’ And I was like, ‘What?! Really?! Actually?!’” Stojanovic said in a video interview with The Associated Press. “For me, all these years practicing tennis, it was my wish to play against Serena. I love her game. I admire her game.”

“I really enjoyed it,” Stojanovic said, smiling about her afternoon. “Even if I lost.” 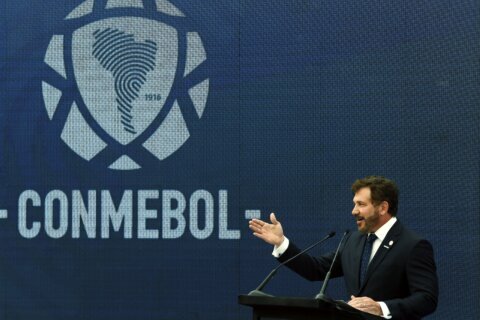