About 200 protesters lit candles and shouted “Free China!” two blocks from the White House on Sunday in a show of support for demonstrations in China calling for an end to severe anti-virus controls and for political change.
Listen now to WTOP News WTOP.com | Alexa | Google Home | WTOP App | 103.5 FM
(1/9) 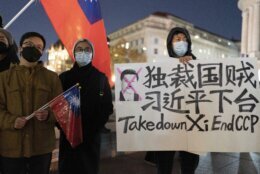 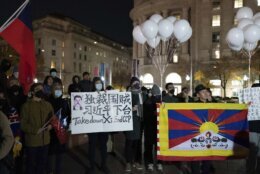 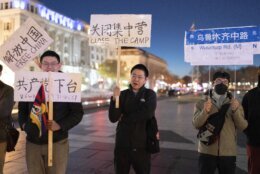 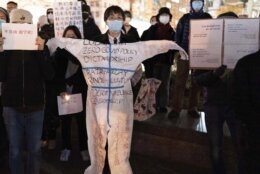 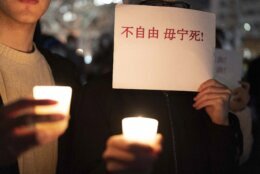 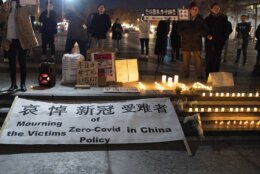 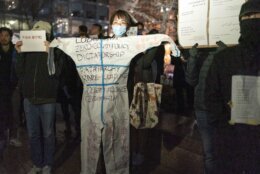 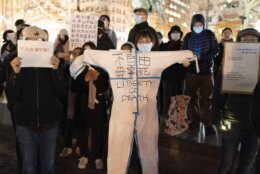 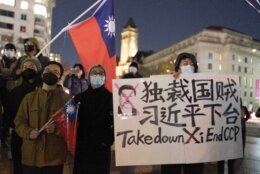 WASHINGTON (AP) — About 200 protesters lit candles and shouted “Free China!” two blocks from the White House on Sunday in a show of support for demonstrations in China calling for an end to severe anti-virus controls and for political change.

Protesters in Freedom Plaza held up signs saying, “No Dictatorship, No Censorship,” demanding that President Xi Jinping and the ruling Communist Party give up power. They held up blank sheets of paper, a symbol of opposition to the party’s pervasive censorship. Some yelled, “Free China!”

The protests erupted Nov. 25 after at least 10 people died in a fire in Urumqi, a city in China’s northwest. Authorities rejected suggestions firefighters or people trying to escape might have been blocked by anti-virus controls. But the disaster became a focus for public frustration with curbs that confine millions of people to their homes.

“I did not care much about these public issues before as it did not happen to me,” said a Chinese student who would give only her surname, Liu, due to fear of retaliation.

“The COVID policy is really improper,” said Liu. “Now that I am in a country with free speech, I shall do my best when my rights can be protected.”

Uighurs, Tibetans and members of other ethnic minorities that are targeted for surveillance and control by the Communist Party joined the protests.

“I was encouraged by the courageous young people in China,” said a man who refused to give his name.

“How can we not stand up after they did?” he said. “I shall at least let them know they were not alone.”

How the US is boosting military alliances to counter China