KUALA LUMPUR, Malaysia (AP) — Najib Razak is Malaysia’s first former prime minister to go to prison — a mighty fall for a British-educated politician whose father and uncle were the country’s second and third prime ministers, respectively.

The enormous 1MDB financial scandal tied directly to him was not just a personal blow but also shook — temporarily at least — the stranglehold his party, the United Malays National Organization, had over Malaysian politics. UMNO had traditionally been assured the support of the country’s ethnic Malay majority and had headed the National Front coalition government since the country became independent of Britain in 1957.

Najib set up the 1MDB state investment fund shortly after taking power in 2009. The U.S. Justice Department and other investigators alleged that at least $4.5 billion was stolen from 1MDB by associates of Najib between 2009 and 2014, and laundered through layers of bank accounts in the U.S. and other countries to finance Hollywood films and extravagant purchases that included hotels, a luxury yacht, art works and jewelry. Then-U.S. Attorney-General Jeff Sessions described the scandal as “kleptocracy at its worst.”

The Justice Department’s civil case filings also alleged $700 million was transferred from bank accounts used in the money laundering to the bank account of “Malaysian Official 1.” It didn’t name the official, but corroborating details made clear it was Najib.

Najib in July 2020 was sentenced to 12 years’ imprisonment by Malaysia’s High Court after being found guilty of abuse of power, criminal breach of trust and money laundering for illegally receiving 42 million ringgit ($9.4 million) from SRC International, a former unit of 1MDB.

Najib, 69, has maintained his innocence and had been out on bail pending his appeals.

The Court of Appeal upheld his conviction and sentence in December, describing the case as a “national embarrassment.” On Tuesday, the Federal Court affirmed the lower court’s decision, sending Najib straight to prison to begin his sentence.

Najib had once cast himself as a liberal and reforming leader of the predominantly Muslim country of over 33 million people. He speaks impeccable English with a posh accent, has his own blog and has a strong social media following.

At the same time, he often seemed far removed from the concerns of ordinary Malaysians and the poor rural Malays who are the bedrock of UMNO. He was mocked by the opposition for once saying he prefers eating quinoa, an expensive imported South American grain, to rice, a staple of the Malaysian diet.

Revelations after his downfall unveiled a serious taste for luxury, particularly on the part of his wife, Rosmah Mansor, who has also faced criminal charges. The total value of cash, jewelry, watches and handbags seized in 2018 from properties linked to Najib amounted to at least $273 million, police said. The haul included 12,000 pieces of jewelry — 2,200 rings, 1,400 necklaces, 2,100 bracelets, 2,800 pairs of earrings, 1,600 brooches and 14 tiaras along with 567 handbags, 423 watches and 234 pairs of sunglasses.

Malalysia has long been beset by corruption, but generally it had been associated with money politics designed to help keep UMNO in power.

Najib was thrust into politics in 1976 after his father died, becoming Malaysia’s youngest lawmaker at age 22, and the youngest ever deputy minister two years later. He became prime minister in 2009, replacing Abdullah Ahmad Badawi who was blamed for the National Front’s reduced majority in an election the previous year.

As both finance minister and prime minister, Najib guided his country through the global financial crisis of 2009, abolished draconian colonial-era security laws and reached out to ethnic minorities with a “1Malaysia” campaign. Then-President Barack Obama praised him as a “reformer with much to do.”

However, his National Front coalition suffered a further loss of support in 2013, losing the popular vote to the opposition for the first time though still winning 133 of 222 parliamentary seats.

In response, Najib imposed new repressive security measures and increasingly pandered to Islamists and ethnic chauvinism to shore up his Malay support base. Opposition leader and former Deputy Premier Anwar Ibrahim was convicted of sodomy for a second time in 2015 and imprisoned in a case he said was fabricated by the government to crush the opposition.

As he came under more and more pressure over the 1MDB scandal, Najib sacked critics in his government including an attorney-general and deputy prime minister, and muzzled the media.

The new attorney-general cleared Najib in 2016, saying the money was a political donation from the Saudi royal family and that most of it was returned.

A 2018 election tested the damage done to Najib by the 1MDB scandal. Crucial to an alliance formed to bring down Najib was the leadership of Mahathir Mohamad, a former prime minister who quit UNMO and ran a vigorous campaign despite being in his 90s. Mahathir, popular among his fellow Malays, led the country from 1981 to 2003, during which was credited for the country’s rocketing economic growth.

Despite the election debacle and his graft conviction, Najib remained politically influential. His UMNO party leads the current government after defections of lawmakers caused the collapse of Mahathir’s reformist government.

“I think the guilty verdict is a very, very good outcome for Malaysia. The Malaysian public has been waiting for a very long time to see the ex-prime minister go to jail,” James Chin, professor of Asian studies at Australia’s University of Tasmania, told The Associated Press. “So with today’s verdict, it is quite clear, at least in the Malaysian case, that even if you hold the No. 1 political position and you did something wrong, you will have to pay the price for it.” 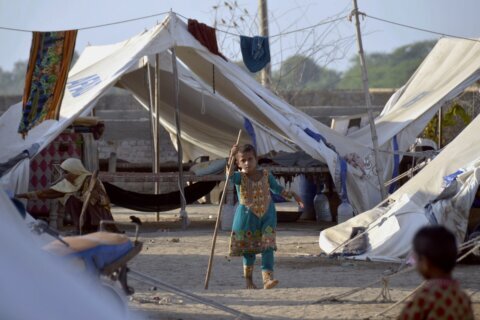