Rights groups urge Sri Lanka not to use force on protesters

A day after President Ranil Wickremesinghe was sworn, hundreds of armed troops raided a protest camp outside the president’s office in the early hours of Friday, attacking demonstrators with batons. Human Rights Watch said the action “sends a dangerous message to the Sri Lankan people that the new government intends to act through brute force rather than the rule of law.”

Two journalists and two lawyers were also attacked by soldiers in the crackdown. Security forces arrested 11 people, including protesters and lawyers.

“Urgently needed measures to address the economic needs of Sri Lankans demand a government that respects fundamental rights,” Meenakshi Ganguly, South Asia director at Human Rights Watch, said in a statement. “Sri Lanka’s international partners should send the message loud and clear that they can’t support an administration that tramples on the rights of its people.”

Also condemning the attack, Amnesty International said “it is shameful that the new government resorted to such violent tactics within hours of coming to power.”

“The protesters have a right to demonstrate peacefully. Excessive use of force, intimidation and unlawful arrests seem to be an endlessly repetitive pattern in which the Sri Lankan authorities respond to dissent and peaceful assembly,” said Kyle Ward, the group’s deputy secretary general.

Wickremesinghe, who previously served as prime minister six times, was sworn in as president a week after his predecessor, Gotabaya Rajapaksa, fled the country. Rajapaksa later resigned while exiled in Singapore.

Sri Lankans have taken to the streets for months to demand their top leaders step down to take responsibility for the economic chaos that has left the nation’s 22 million people struggling with shortages of essentials, including medicine, fuel and food. While the protesters have focused on the Rajapaksa’s family, Wickremesinghe also has drawn their ire as a perceived Rajapaksa surrogate.

Armed troops and police arrived in trucks and buses on Friday to clear the main protest camp the capital, Colombo, even though protesters had announced they would vacate the site voluntarily.

Sri Lanka’s opposition, the United Nations, and the U.S. have denounced the government’s heavy-handed tactics.

Despite heightened security outside the president’s office, protesters have vowed to continue until Wickremesinghe resigns.

On Friday, he appointed as prime minister a Rajapaksa ally, Dinesh Gunawardena.

Wickremesinghe on Monday declared a state of emergency as acting president in a bid to quell the protests. Just hours after he was sworn in, he issued a notice calling on the armed forces to maintain law and order — clearing the way for the move against the protest camp.

The protesters accuse Rajapaksa and his powerful family of siphoning money from government coffers and of hastening the country’s collapse by mismanaging the economy. The family has denied the corruption allegations, but the former president acknowledged that some of his policies contributed to Sri Lanka’s crisis.

The political turmoil has threatened efforts to seek rescue from the International Monetary Fund. Still, earlier this week, Wickremesinghe said bailout talks were nearing a conclusion.

The head of the IMF, Kristalina Georgieva, told the Japanese financial magazine Nikkei Asia this week that the IMF hopes for a deal “as quickly as possible.” 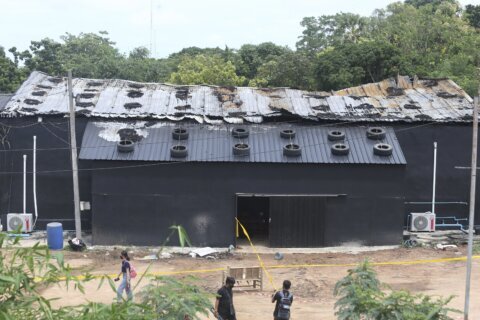