Wall Street closed out another volatile week of trading with a broad rally Friday, though it wasn't nearly enough to keep the market from its sixth straight weekly drop, the longest such streak since 2011.
Listen now to WTOP News WTOP.com | Alexa | Google Home | WTOP App | 103.5 FM

NEW YORK (AP) — Wall Street closed out another volatile week of trading with a broad rally Friday, though it wasn’t nearly enough to keep the market from its sixth straight weekly drop, the longest such streak since 2011.

The S&P 500 climbed 2.4%. More than 90% of the companies in the benchmark index closed higher. The Nasdaq rose 3.8% as more gains in technology companies helped lift the tech-heavy index. The Dow Jones Industrial Average rose 1.5%.

The upbeat finish still left the indexes with weekly losses of more than 2.4% each, extending the string of weekly declines to six weeks for the S&P 500 and Nasdaq, while the Dow registered its seventh straight weekly drop.

Markets have been slumping since late March as traders worry that the Federal Reserve may not succeed in its delicate mission of slowing the economy enough to rein in the highest inflation in four decades without causing a recession.

While there have been sudden rallies along the way, including a 2.5% gain for the S&P 500 in late April and a 3% gain in early May, the market has continued to lose ground since setting an all-time high at the start of the year.

That’s not an unusual pattern on Wall Street when indexes are close to entering a bear market, or a decline of 20% or more from their most recent peak. The closest the S&P 500 has gotten to a bear market this year was Thursday, when it ended 18.1% below the peak it reached in January.

“If you look back at how bear markets unfold, they don’t go down every day, all day, all at once until the finish, they have pretty good rallies,” said Tom Martin, senior portfolio manager with Globalt Investments. “This might be one of those big rallies that takes you back up somewhat before the market turns back down again.”

Twitter fell 9.7% after Tesla CEO Elon Musk said he was putting his deal to acquire the social media company on hold. Tesla rose 5.7%.

Businesses have been struggling to keep up with increased demand for a wide range of products and goods amid supply chain and production problems. They’ve been raising prices on everything from food to clothing, which has been putting pressure on consumers and raising concerns about a pullback in spending and slower economic growth.

The Fed is attempting to temper the impact from rising inflation by pulling its benchmark short-term interest rate off its record low near zero, where it spent most of the pandemic. It also said it may continue to raise rates by double the usual amount at upcoming meetings. Investors are concerned that the central bank could cause a recession if it raises rates too high or too quickly.

“There’s a lot of issues and rising inflation with a tightening Fed is not the greatest of market conditions, but at some point it’s priced in,” said Jay Hatfield, CEO of Infrastructure Capital Advisors.

Technology stocks led the gains Friday. Apple rose 3.2% and Microsoft rose 2.3%. The sector has been behind much of the broader market’s volatility throughout the week and has been slipping overall as investors prepare for higher interest rates, which tend to weigh most heavily on the priciest stocks.

Bond yields rose significantly. The yield on the 10-year Treasury rose to 2.93% from 2.82% late Thursday.

Investors have also been focusing on the latest round of corporate earnings to gain more insight into how inflation is impacting businesses and consumers. Several major retailers will report their results next week, including Walmart, Target and Home Depot.

Bitcoin steadied around $30,000 late Friday after dropping to around $25,420 earlier this week, its lowest level since December 2020, according to CoinDesk. Only six months ago it was over $66,000. 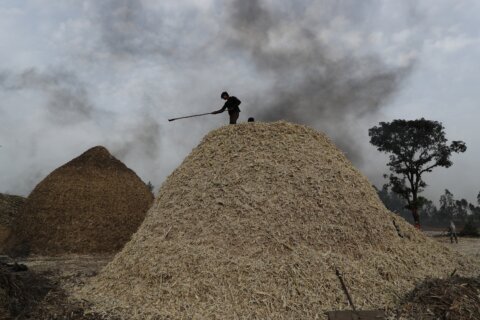